Building Stronger Public Health through the Pandemic and Beyond
Skip to Content
What you need to know about the defense industry - in your inbox.
Business
Pentagon: We Can’t Afford to Replace Aging ICBMs, Bombers, Subs

Even if sequestration goes away, the Defense Department will need at least $10 billion more per year to modernize its nuclear arsenal, procurement chief says.

The Defense Department cannot afford to replace its aging nuclear-missile submarines, ICBMs, and long-range strategic bombers unless it gets a funding boost or radical policy changes are made, according to a top Pentagon official.

Even if Congress approves the White House’s 2016 budget for the Pentagon, the Pentagon will find itself $10 billion to $12 short beginning in 2021, Frank Kendall, undersecretary for acquisition, technology and logistics, said Tuesday at the Navy League’s Sea Air Space conference.

“We don’t have a solution to that problem right now,” Kendall said, asked by a reporter about the plan for funding a replacement for the Navy’s Ohio-class submarines. All more than 30 years old, these “boomers” slip silently around the world’s oceans, waiting for the command to launch their nuclear-tipped ballistic missiles.

The entire U.S. nuclear inventory needs to be upgraded by the 2030s, Pentagon officials say. That includes the submarines, land-based Minuteman intercontinental ballistic missiles and new stealth bomber. Together, the three make up the “nuclear triad,” the cornerstone of America’s deterrent force. The Pentagon also says it needs a new nuclear cruise missile. 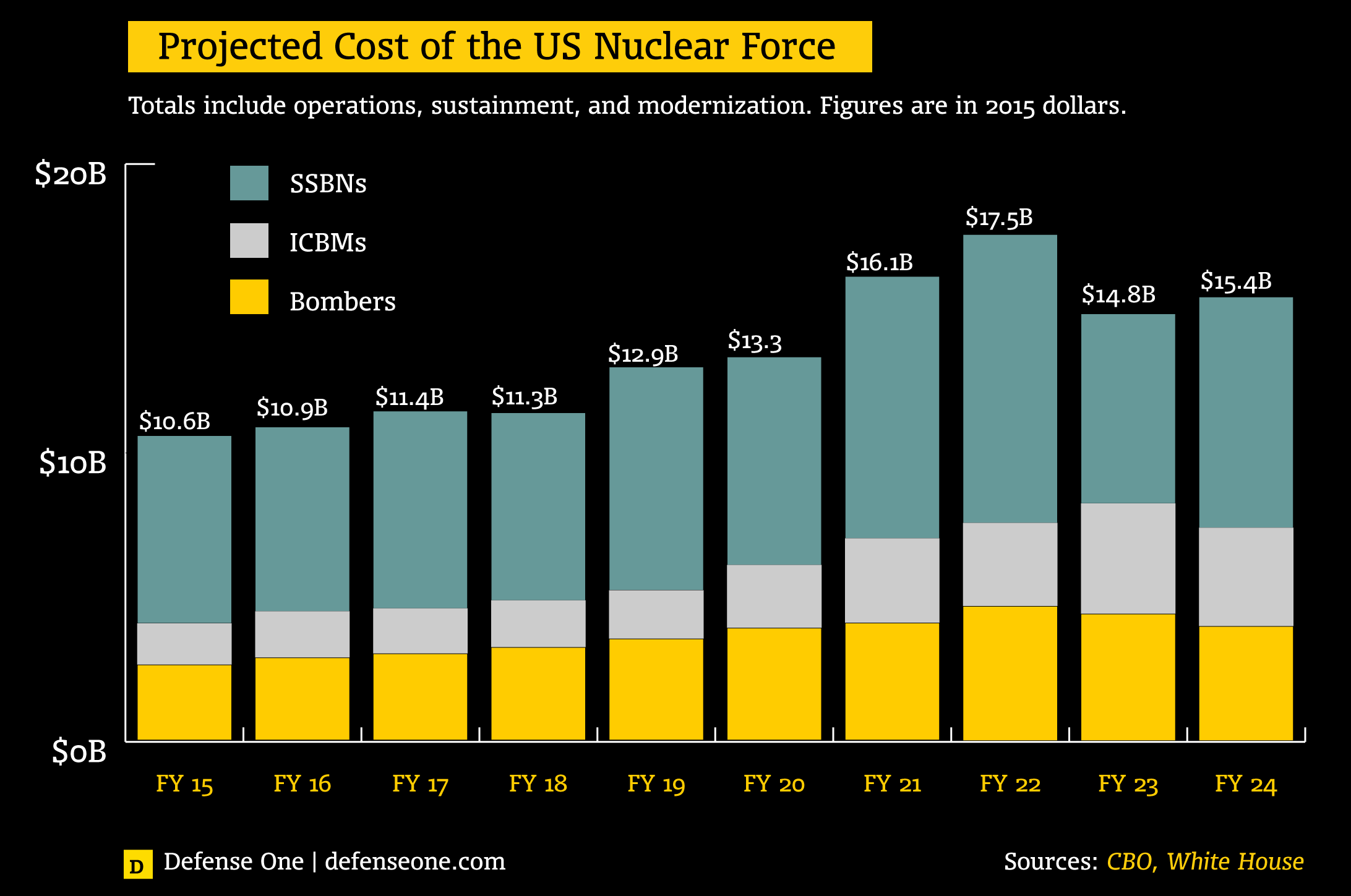 Right now, more money toward the end of this decade appears to be the only way to fix the problem, Kendall said.

“I frankly think the only way we can address it and keep the force structure in the Department of Defense that we would like to have is higher budgets,” he said. “I really don’t right now see any management solutions that will help us.”

Defense Secretary Ashton Carter has put together a Pentagon group, the Strategic Portfolio Review, to look at ways to address the funding shortfall and nuclear modernization.

The Air Force intends in coming months to pick a builder for its new bomber, of which it plans to buy 80 to 100 for a planned $550 million apiece. However, the aircraft is not expected to carry nuclear weapons when it is declared battle-ready sometime in the next decade.

Sign up here to watch Air Force Chief of Staff Gen. Mark Welsh sit down with Defense One's Marcus Weisgerber for an exclusive interview on April 22.

Cost estimates for the Navy’s new Ohio-Class replacement submarine range from $5.5 billion to $8 billion each. The Navy plans to buy 12 new subs.

When the new ICBMs and new cruise missiles are included, the total price tag for the nuclear arms upgrade ranges from hundreds of millions to $1 trillion over the next two decades.

That leaves the Pentagon with an affordability problem that could force policy changes.

“There are radical policy changes you can talk about, like changing the nature of the triad, that would help significantly,” Kendall said.

While academics and military strategists often debate removing one of the legs to the triad, the Pentagon has stuck with the three in all of its strategy reviews in recent years.

NEXT STORY: Pentagon's Next Bomber Will Be Built To Upgrade