Perspecta's View: Six Steps for DES to Capture Innovation
Skip to Content
What you need to know about the defense industry - in your inbox.
Business
In Romania, US Wraps Construction of Anti-Missile Battery

With radar and interceptors in place, the Pentagon intends to be ready to shoot down Iranian missiles next year.

The U.S. has all of the pieces in place at its missile-defense complex in southern Romania, despite Moscow’s objections and the highest NATO-Russia tensions since the Cold War.

Construction of the anti-missile battery and radar — which Washington says are there to shoot down weapons fired toward Europe from Iran, not Russia — is in the final stages at the Deveselu military base in southern Romania, about 90 miles west of Bucharest, Pentagon officials say.

In coming days, the Pentagon will make a “technical capability declaration” — that is, it will certify as ready the complex’s various components: a powerful radar, missile interceptors, and communications equipment.

The site will be declared operational — able to down a missile — in 2016, after the successful completion of a training exercise, a Pentagon official said. 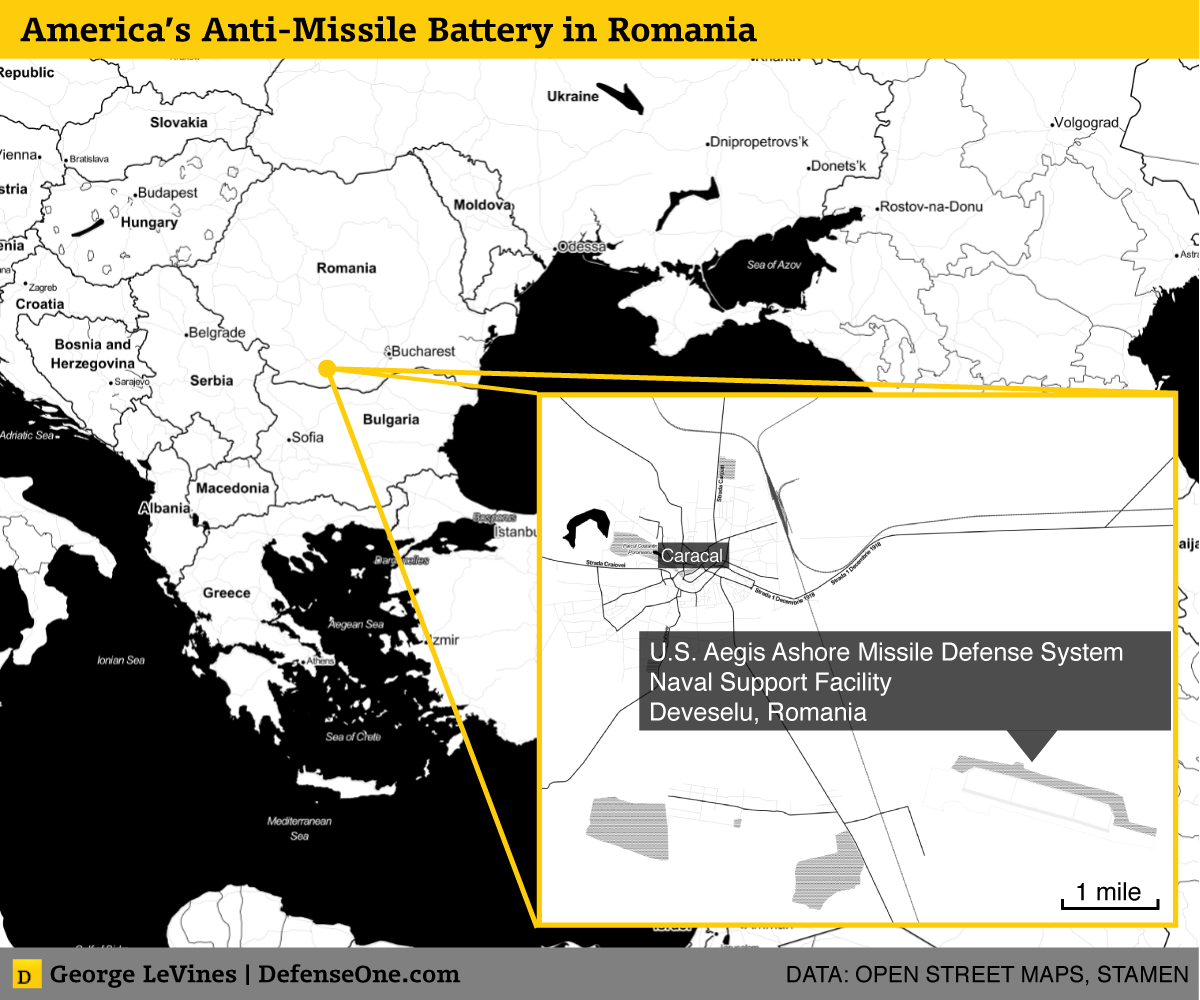 Last Wednesday, military testers shot down a target over the Pacific Ocean using a land-based Standard Missile-3 interceptor launched from Kauai, Hawaii. This successful test of the SM-3 Block 1B clears the way for its use in Romania, along with its Aegis guidance radar — the first operational ground-based version of two systems originally designed for shipboard use.

“The test’s success keeps the Aegis Ashore program and the SM-3 Block 1B on track for deployment in Romania by the end of this year,” said a Thursday statement from Raytheon, which builds the interceptor.

When fully active, the Deveselu facility will be operated by more than 200 U.S. sailors and civilians plus Romanian military personnel.

Russia has opposed the European missile shield since its inception last decade. In 2009, President Obama announced the Phased Adaptive Approach, a tiered deployment of missile defenses across Europe. The first phase included the deployment radars and interceptors on Navy ships. The Romanian base is the second phase and the third is the deployment of more interceptors to Poland.

“Non-nuclear powers where missile-defense installations are being installed have become the objects of priority response,” Gerasimov said, according to the Wall Street Journal.

In recent months, NATO has held some of its largest military drills since the Cold War. American forces have been deploying more frequently to Eastern Europe to train with members of the alliance near Russia.

U.S. officials broke ground at the Romanian missile interceptor complex in October 2013. Google Earth images from just a few years ago show the tiny base’s 8,000-foot runway filled with cracks, with dozens of Soviet-era fighter jets sitting idly on taxiways for what appears to be years. More recent satellite images show widespread construction throughout the complex.

Now, construction at Deveselu is finishing up, said Lt. Cmdr. Robert Johnson, a spokesman for U.S. Naval Forces Europe-Africa in Naples, Italy, the organization that oversees sailors there. U.S. officials are expecting to formally declare the site operational later this month.