Next Generation Interceptor: The Nation’s Next First Line of Defense Against Ballistic Missile Threats
Skip to Content
What you need to know about the defense industry - in your inbox.
Business
Industry stock soars under budget caps; V-22 flies with 3-D printed part; Language matters, and more.

Vol. 3: Getting our budget on. Plus: meet up with Marcus, and he'll buy you a drink. But where?

When Industry Outplanned the Pentagon

Five years ago this week, Congress passed a law that no one thought would actually take effect. But it did, and the Budget Control Act has since been a thorn in the sides of the Pentagon, White House, and Congress alike. No one likes the budget caps it installed, but Republicans and Democrats cannot find enough common ground to change the law.

Now, fewer than 100 days from a presidential election, we are no closer to getting rid of the budget caps. While the worst of them are in the past, the Pentagon (and rest of the government) are facing five more years until the law expires in 2021.

The Pentagon loves to tout its ability to plan for all sorts of bizarre things. (“We’ve got contingency plans for everything you can imagine in the world, including probably an invasion of Canada,” said Todd Harrison of the Center for Strategic and International Studies, arguably Washington’s top defense budget analyst.) But it did not plan for the BCA to take effect, and this political strategy backfired. When the caps took effect in March 2013, DoD was forced to furlough some workers and suspend some military training.

Who did prepare? Defense firms. They downsized, cutting people , facilities , and operating costs . “These companies saw that there was a downturn coming in the budget and they started restructuring,” Harrison said.

And shareholders rewarded them. How have the five largest U.S. defense firms fared over the past five years? Their stock is up an average of 220 percent. Northrop Grumman’s rose 327 percent; Lockheed Martin’s 272 percent; and Raytheon’s, 252 percent. Compare that to the stock market as a whole. It’s in a much better place (as of Wednesday, the Dow Jones Industrial Average is up about 60 percent from August 2011), but defense firms have clearly performed much better than that. (See chart below.) 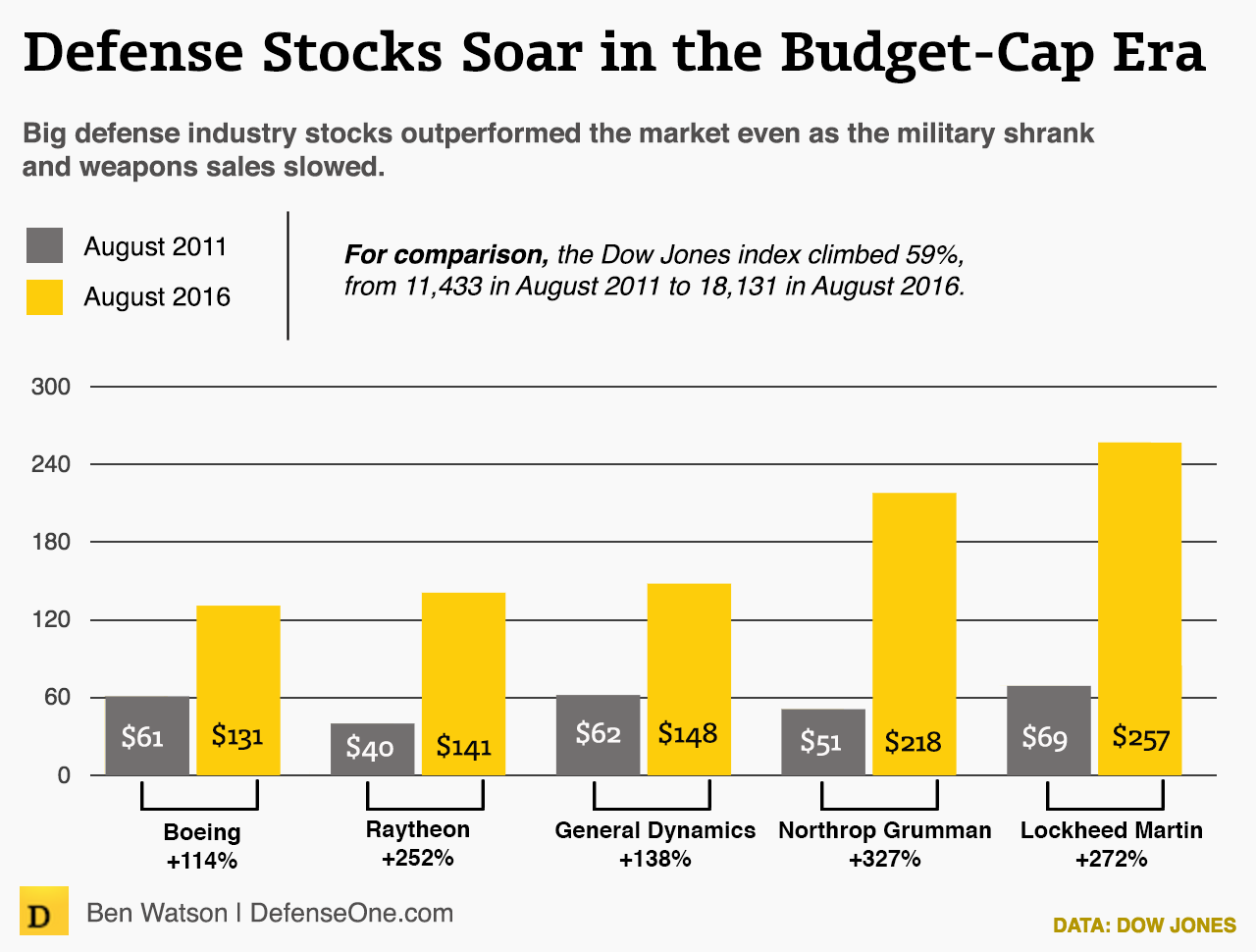 “[Y]ou look at their performance on Wall Street and they’re really stars over the past few years,” Harrison said.

They might not have wanted the cuts, and helped the massive lobby effort against them, but “the defense industry eventually did get it, and they responded appropriately in how they restructured their businesses,” Harrison said. The Pentagon is still trying to play catch-up to this, though.”

Bonus: Here's a slide from a recent Harrison briefing. It lists then-Defense Secretary Leon Panetta’s 2011 predictions of how budget caps would affect the military. Many program cancellations or truncations never happened, but then, neither did the full weight of the cuts. In four of the five years they’ve been in effect, Congress has found a way to raise the cap levels.

The Navy flew an MV-22 Osprey with a 3-D printed titanium “link and fitting assembly for the engine nacelle.” And now they plan to use such additive manufacturing techniques to build more titanium and stainless steel parts for the V-22, H-1 and CH-53. “The [Osprey test flight] is a great first step toward using AM wherever and whenever we need to,” Liz McMichael, the Additive Manufacturing Integrated Product Team lead, said in a Navy statement. “It will revolutionize how we repair our aircraft and develop and field new capabilities — AM is a game changer.”  More here .

With the federal budget capped through 2021, defense spending will be an immediate first test of the next American president.

Welcome to the Defense One Global Business Brief by Marcus Weisgerber, your new weekly source for all things future-of-the-business-of-defense. It’s our third edition, so we’re getting our budget on. Plus we’re the only newsletter around that will buy you free drinks (keep reading to learn more). Send your tips, comments, and random thoughts to mweisgerber@defenseone.com , or hit me up on Twitter: @MarcusReports . If you’re reading this, chances are you’ve subscribed . That means you should tell a friend to subscribe too!

The U.S. and Singapore are considering a “potential long-term training detachment” for the Singapore air force in Guam, the White House announced. President Obama discussed arrangement with Singapore Prime Minister Lee Hsien Loong, who was in Washington this week for an official visit. Singapore already has about 1,000 military personnel in the U.S. where it trains F-15 and F-16 fighter and Apache helicopter pilots. Due to its tiny size, Singapore has trouble training its pilots at home. Opening a training detachment on Guam, most likely at Andersen Air Force Base, could translate into jobs for things like aircraft maintenance.

Can we please, please, please stop using the term sequestration (or sequester) as a synonym for federal budget caps? Budget caps are simply that, budgets caps. Sequestration only happens if Congress passes a budget over those budget caps. It’s the uniform budget cuts, of equal percentage, across all spending accounts.

When Pentagon officials say there’s a threat of “sequestration” returning in 2018, that’s not accurate. What they’re saying is they do not like the budget cap levels. That’s fine. Just use the correct terminology, please.

August is supposedly a time when Washington recharges its batteries. Congress gets out of the oppressive heat and humidity, cabinet officials take vacation and the news cycle is supposed to slow. I remember an editor telling me August is a time to take some time off, hit the links with a source, and plan for the waterfall of news in September. I’m now into my 11th year in DC and I’ve yet to experience this August slowdown.

So I attended an “only-in-Washington” event, Harrison’s Tuesday “party” at CSIS to mark the five-year anniversary of the Budget Control Act. And wouldn’t you know it, two dozen reporters showed up at 8:30 a.m. to hear the budget guru’s assessment of the law has had on military. There were no candles or cake, but there were bagels, muffins and lots of coffee. (Imagine the parties around town if the law were repealed.)

If you’re in Huntsville, Alabama, on Aug. 15 , I’ll buy you a drink. Seriously. Join me at the Space and Missile Defense Symposium, for Defense One Cocktails and Conversations as we discuss the future of missile defense. We’ll explore the emergence of missile defense as a functioning technology sought by militaries across the world and discuss why battlefield successes and ever-increasing capabilities have made missile defense a growth area for the defense industry. Come have a drink on Aug. 15 with Missile Defense Agency’s Brig. Gen. William Cooley, program executive for programs and integration and other panelists. For the lineup, details, and registration, go here .

NEXT STORY: Neither Clinton Nor Trump Will Be Able to Fix the Pentagon’s Budget