Federal Agencies Tap Data Visualization to Track and Mitigate the Spread of COVID-19
Skip to Content
What you need to know about the defense industry - in your inbox.
Business
Obama’s Final Arms-Export Tally More than Doubles Bush’s

Most of the $278 billion in approved sales have gone to Saudi Arabia and other Mideast allies.

By Marcus Weisgerber and Caroline Houck

The Obama administration has approved more than $278 billion in foreign arms sales in its eight years, more than double the total of the previous administration, according to figures released by the Pentagon on Tuesday.

Many of the approved deals — most but hardly all of which have become actual sales — have been to Mideast nations, including key allies in the campaign against Islamic State militants and countries that have been building up their defenses in fear of a nuclear Iran.

Saudi Arabia has been the largest recipient, reaping prospective deals worth more than $115 billion, according to notices announcing the deals that were sent to Congress for approval.

“Nobody even comes close” for the number of deals and total value, said William Hartung, director of the Arms Security Project at the Center for International Policy.

But Hartung noted that only about half of those approvals have so far resulted in actual contracts. For instance, the administration approved an $11.25 billion sale of four Lockheed Martin Multi-Mission Surface Combatants last year, but the Saudis have yet to place an order for the warships. 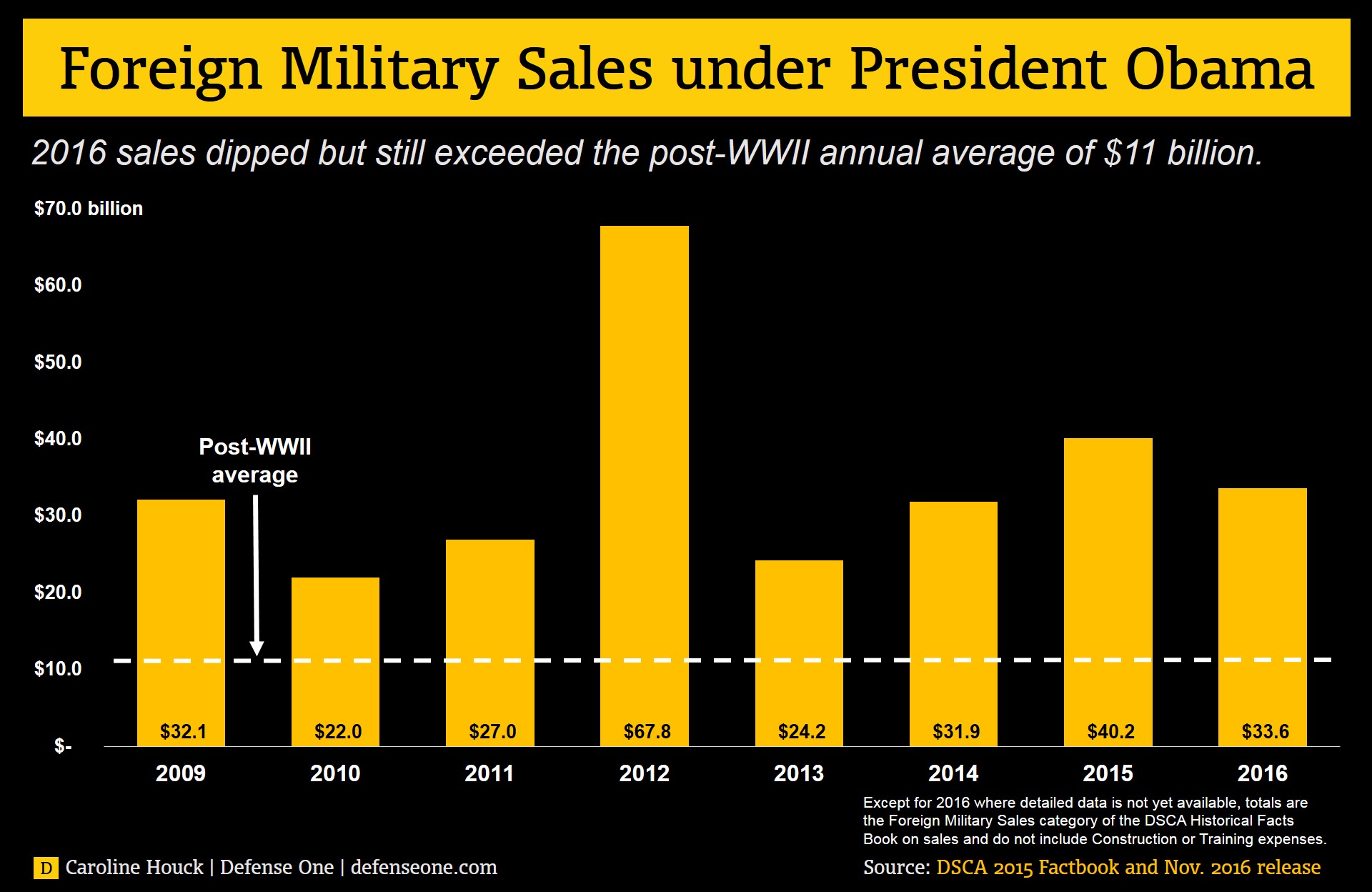 On Tuesday — the same day American votes took to the polls to elect a new president — the Pentagon announced that it had approved $33.6 billion in arms sales in 2016. That’s down from the $40-plus billion approved in 2015.

These estimated totals are compiled for each U.S. fiscal year, which runs from October through September, and often change as new data comes in. The Defense Security Cooperation Agency — the arm of the Pentagon that handles foreign sales — updates its data each year based on individual sales, so its figures often fluctuate from year to year.

Not included in the 2016 totals are fighter jets deals with Kuwait, Qatar and Bahrain, which are expected to top $7 billion. The administration has approved those deals and is expected to publically release them later in the year, meaning they will count toward 2017 arms sales figures.

How does the Obama administration compare to its predecessors? Earlier this year, Hartung did the math: Obama has brokered more arms deals than any administration since World War II. For immediate comparison, the George W. Bush administration approved $128.6 billion in arms export between 2001 and 2008.

NEXT STORY: The next revolution in space; Lockheed decries latest F-35 order; A new path for special-operations weapons?