Federal Agencies Tap Data Visualization to Track and Mitigate the Spread of COVID-19
Skip to Content
Get all our news and commentary in your inbox at 6 a.m. ET.
Ideas
We Welcome China In Djibouti, Just As We Welcomed The West

Djibouti’s foreign minister pushes back on assertions China is elbowing Americans out of the strategic East African footprint. 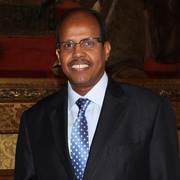 It is hard for me to take James D. Durso's assertions about Djibouti, our government, and China’s influence here seriously when his article contains so many errors. Djibouti held no election in 2015, and although April's presidential election may have had no American monitors, or indeed Mr Durso, in attendance, the African Union's monitors described it as “inclusive, free and sufficiently transparent to be considered as a credible reflection of the will of the Djiboutian people.”

I could identify further inaccuracies, but will instead highlight the facts concerning Djibouti's geopolitical importance and the enduring strength of its relationship with the United States.

Djibouti is a vital partner for the West, Asia, and its Middle East and African neighbors concerning international security matters. It also acts as a regional hub providing critical sea, air, rail, and road linkages for eastern Africa, including the land-locked economies of Ethiopia and South Sudan.

Towards regional stability, Djibouti is a contributor of troops to the African Union Mission in Somalia, or AMISOM. As well as acting in a peacekeeping role, AMISOM provides safe passage and protection to all those involved in the ongoing national reconciliation process.

Within our own borders, Djibouti has a long tradition of hosting refugees from different countries in the region, such as Somalia and Eritrea. More recently, Djibouti has been at the forefront of countries helping the people of Yemen by providing logistical and humanitarian support to refugees fleeing the violence.

Related: China’s Rising Near This Key US War Base. Here’s How We Push Back
Related: How China Is Building the Biggest Commercial-Military Empire in History
Related: Four Ways the US Can Help the African Union Stand on Its Own

Although tens of thousands of refugees have passed through Djibouti towards safety, 9,000 now reside in our capital, with a further 1,000 living in a refugee camp in the north of the country. As you might imagine, the influx of large numbers of Yemeni civilians pose considerable challenges in terms of security, as well as placing a strain on our economic resources. We are trying to address all of these issues in partnership with the international community.

Some people have questioned whether China's decision to establish a presence in Djibouti means that our nation's ties with the United States are weakening. The answer is simple – no.

We welcome China's presence in Djibouti, just as we previously welcomed forces from the U.S., NATO, France, the United Kingdom, Italy, and Japan, who are present in our country. These are vital strategic allies for Djibouti as we fight against terrorism and piracy, which remain significant threats to the international community and the global economy.

The United States and Djibouti have been allies since our nation gained independence in 1977. We supported the Americans in the Gulf War and after the 2001 terrorist attacks.  Camp Lemonnier, the U.S.'s only permanent military base in Africa, houses 4,000 American personnel.

As well as providing invaluable assistance in the regional fights against al-Shabaab in Somalia and al-Qaeda in Yemen, Camp Lemonnier also contributes more than $100 million a year to Djibouti's economy, with over 1,700 locals working there.

In February, Assistant Secretary of State Tony Blinken led an American delegation to our country to attend the second U.S.-Djibouti Binational Forum. During his visit, Blinken praised the “quality of friendship and cooperation between the two countries and its two peoples.”

He said the Forum provided a “valuable opportunity to exchange ideas concerning the implementation of multiple initiatives and partnerships. Djibouti is one of the few African countries maintaining a privileged partnership with the United States concerning energy and economic developments."

I hope this overview provides a wider — and more accurate — description of the geopolitical issues facing Djibouti and how the United States remains by our side, as one of our closest and most-trusted allies.

Mahamoud Ali Youssouf is minister of foreign affairs of the Republic of Djibouti.

NEXT STORY: Obama's Last Chance to Terminate US Nuclear Policy (Thanks to Trump)