The Cold War brought plenty of false alarms — but nothing like the situation we face today.

We are closer to a nuclear disaster than at anytime since 1995. And it is going to get worse.

What is it like to live on the nuclear brink? For professional golfer John Peterson playing in the Sony Open in Honolulu, it meant huddling terrified “under mattresses in the bathtub with my wife, baby and in-laws,” he said, on Twitter. “Please lord let this bomb threat not be real.”

It was not real. But there are thousands of Hawaiians with similar stories after they got the official warning:

“BALLISTIC MISSILE THREAT INBOUND TO HAWAII. SEEK IMMEDIATE SHELTER. THIS IS NOT A DRILL.”

It took 38 minutes for state officials to cancel the alert, saying an employee had pushed the wrong button.

“False alarms of the apocalypse are not a new feature of the nuclear age,” explains analyst Ankit Panda in an excellent summary of Saturday’s incident.

There have been dozens of mistakes and false alerts, some bringing us a few minutes and one decision away from a nuclear disaster.

In 1983, the Soviet Union was convinced that a NATO exercise was cover for a real invasion. On edge, they shot down a civilian airliner, killing 269 aboard, believing it a US spy plane. Tensions escalated but calm reactions by key personnel prevented them from boiling over into nuclear combat.

In 1995, the Russian nuclear football was opened for the first time in the nuclear age. Russian generals told President Boris Yeltsin that the nation was under attack and he had to launch Russia’s nuclear weapons immediately. They had mistaken the launch of a Norwegian weather rocket for a U.S. submarine-launched ballistic missile they believed was going to blind Russian sensors as a prelude to an all-out nuclear assault. Fortunately, Yeltsin wasn’t drunk; he did not believe that his friend Bill Clinton would do this. They waited. There was no blast. They closed the football and the world again escaped the end of civilization.

Nuclear close calls are the dangerous flip side of our national faith in nuclear deterrence. “Nuclear weapons save lives,” Brig. Gen. Gregory Bowen, deputy director for global operations at U.S. Strategic Command, told me on a panel at the Defense One Summit last November. “They are an insurance policy for our national survival,” he said, that prevent the great powers from going to war with each other.

That Cold War belief long has been challenged. “Reliance on nuclear weapons for this purpose is becoming increasingly hazardous and decreasingly effective,” wrote George Shultz, William Perry, Henry Kissinger, and Sam Nunn in The Wall Street Journal. They wrote it 11 years ago. “Unless urgent new actions are taken,” they warned, “the U.S. soon will be compelled to enter a new nuclear era that will be more precarious, psychologically disorienting, and economically even more costly than was Cold War deterrence.” It was luck, not policy, that allowed us to escape nuclear war, they argued. “Will new nuclear nations and the world be as fortunate in the next 50 years as we were during the Cold War?”

We just got a glimpse of the answer. Only a few of the steps these four statesmen urged long ago have been taken. The Hawaii nuclear scare this weekend revealed the results: innocent men, women, and children are at a greater risk of nuclear disaster today, and it’s getting worse.

Here’s three reasons why: first is the risk of war with North Korea. Tensions have been growing for months, fueled by Kim Jong-Un’s tests and President Donald Trump’s tweets. New Korean talks hope to de-escalate the crisis, even as the United States deploys strategic B-2 stealth bombers to Guam amid White House consideration of preemptive strikes. We may enjoy a few months of calm, with the U.S. agreement to suspend joint U.S.-South Korean military exercises during February’s Winter Olympics. But the drills have been rescheduled for April.

That could time with what many believe will be a crisis with Iran. Trump has threatened to pull out of the agreement now constraining Iran’s nuclear program. These dual crises may raise tensions to new heights, increasing the risk of miscalculation and misunderstanding – and more false alarms.

The second risk is Trump’s insistence on a new nuclear posture that would have the U.S. military increase the role and number of its nuclear weapons. It will keep hundreds of weapons on hair-trigger alert and develop new, “more usable” nuclear weapons for a wider range of missions, including use against non-nuclear targets. This breaks with past nuclear policy. “It is subverting traditional mechanisms for controlling them,” warns analyst Adam Mount in The Atlantic. The new posture essentially operationalizes Trump’s boast to MSNBC’s Mika Brzezinski in December 2016, when he said, “Let it be an arms race.” The new strategy does just that. “The Trump Nuclear Posture Review will abandon U.S. leadership to reduce nuclear risks,” says Mount, “and instead follow our adversaries into a world where nuclear competition is commonplace.”

The third risk is the one that Americans worry about the most: Trump, with sole and unfettered authority to launch America’s nuclear weapons, will impulsively start a nuclear war. Almost 60 percent of Americans do not trust Trump to make wise decisions about nuclear weapons, according to a Pew survey last year. These concerns are likely to grow as doubts mount over the president’s mental stability and as the Russia investigation gets closer to the Oval Office, increasing incentives for the president to divert domestic pressures with a foreign crisis. Many believe President Richard Nixon brought the country to DEFCON 3 during the height of the Watergate crisis in 1973 for precisely this purpose.

This is a time to have faith in our power to challenge these ominous trends. A time, in fact, to heed the words of Martin Luther King, Jr.

For King, the struggle against racism was part of a larger struggle for peace and justice. He repeatedly spoke out against nuclear war. As early as 1957 he said, “I definitely feel that the development and use of nuclear weapons should be banned.”

Accepting the Nobel Peace Prize in 1964, King eloquently spoke to the hopes of many.

I accept this award today with an abiding faith in America and an audacious faith in the future of mankind. I refuse to accept despair as the final response to the ambiguities of history…I refuse to accept the view that mankind is so tragically bound to the starless midnight of racism and war that the bright daybreak of peace and brotherhood can never become a reality.

I refuse to accept the cynical notion that nation after nation must spiral down a militaristic stairway into the hell of thermonuclear destruction…we must transform the dynamics of the world power struggle from the negative nuclear arms race which no one can win to a positive contest to harness man’s creative genius for the purpose of making peace and prosperity a reality for all of the nations of the world. 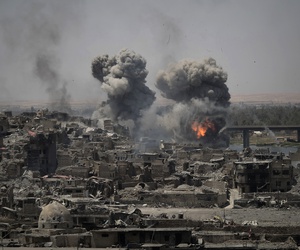 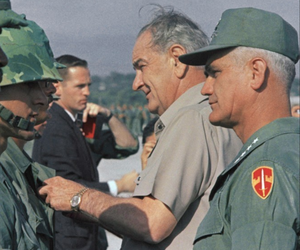 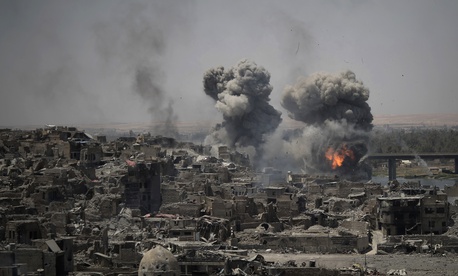 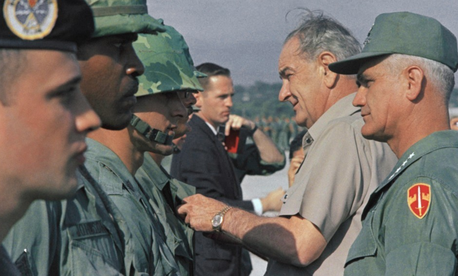