Here’s How Multi-cloud Is Driving the Future of Government Work
Skip to Content
Get all our news and commentary in your inbox at 6 a.m. ET.
Ideas
For Saudi Arabia, What Now?

Riyadh has military options for retaliating against Iran. The Trump administration needs to persuade Saudi leaders not to use them. 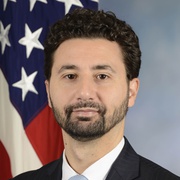 It’s doubtful that U.S. President Donald Trump’s new sanctions against Iran’s Central Bank, along with his commitment to modestly increase U.S. troops and equipment in the Gulf region, will much deter Tehran from attacking Saudi Arabia again. After all, the Iranians’ strategy for pushing back against Washington’s “economic warfare,” as they see it, is to ramp up their violence in the region and, specifically, go after vulnerable U.S. partners. If Tehran responds to these new sanctions by bombing a Saudi palace or a government ministry in Riyadh, it shouldn’t come as a surprise.

Should that happen, and Saudis die as a result, it would constitute a code red in the Kingdom. Saudi Arabia’s options would be limited, given its weak military capacity and suspect diplomatic muscle, but it’s a mistake to say that they don’t exist. The Trump administration should better understand Saudi thinking if it wants to avoid getting dragged into another endless war in the Middle East.

It remains unclear just how much control Crown Prince Mohamed bin Salman, or MBS, has over Saudi foreign policy under his ailing father King Salman, but his influence is significant. MBS’s immediate reaction to another devastating Iranian attack would be to test Trump’s pulse, but if he suspects that the U.S. response would be more of the same – assuming the Iranians avoid killing American soldiers based in Riyadh’s Prince Sultan Air Base – he might go it alone.

MBS should know that direct military action against Iran carries a world of challenges and risks. The Kingdom simply cannot afford an open-ended war with Iran because:

One, it needs every penny to finance Saudi Vision 2030, on which MBS’s domestic credibility rests.

Two, the local pressures of such a war, including national leadership and military management, would be too great for a young leader who is stuck in a quagmire in Yemen and facing international opprobrium due to accusations of involvement in the murder of Saudi journalist Jamal Khashoggi, among other travails.

Three, a war with Iran, which inevitably would have religious, Sunni-versus-Shia connotations, would embolden the radical Saudi clergy, whom MBS has been trying hard to isolate in his process of power consolidation.

Four, the Saudi military is not made for long-term campaigns. It lacks manpower and experience. It can throw a punch thanks to advanced U.S. equipment (for example, a squadron of F-15SA Strike Eagle planes could take off from Prince Sultan Air Base and hit a high-value target in southwestern Iran with the help of standoff munitions), but it can’t sustain a long fight. Iran can, on the other hand, if the 1980-88 Iran-Iraq War is any guide.

These are all real concerns that MBS would have to consider, but he also would have to weigh them against the costs of inaction. The perception of weakness at home, especially in the face of a historical enemy, might invite disgruntled princes and clergymen to challenge his reign.

But what if MBS starts a war with Iran without having to finish it? If these longtime foes begin exchanging fire, sending the region up in flames and risking American lives and a major spike in the price of oil, the United States will no longer afford to be a bystander. That was a U.S. concern when Israel contemplated in 2008 and 2010 using force against Iran to stop it from acquiring a nuclear weapon. It’s a similar situation with the Saudis today, at least in terms of the likely outcome of U.S. entrapment. The moment MBS pulls the trigger, Washington would be in a bind.

This hypothetical, but no longer unthinkable, scenario can be prevented through more serious and regular consultation between Trump and MBS. This cannot be limited to a quick visit by Secretary of State Mike Pompeo to Riyadh to reassure the Saudis. Washington must game-plan this with Saudi leaders to not only assuage their fears but also check their worst impulses.

MBS has done the right thing thus far by exercising prudence and leaning on the Americans. But if Tehran strikes again, Trump shouldn’t take his patience for granted.

NEXT STORY: Imagine If Obama Had Done This