Innovation, Partnership Take the Army’s Long-Range Missiles to the Next Level with PrSM
Skip to Content
Get all our news and commentary in your inbox at 6 a.m. ET.
Ideas
What Biden Told Me on the Train After Trump’s First UN Speech

In the Biden-Harris vision, my multi-ethnic family is the fulfillment of America’s promise to the world. 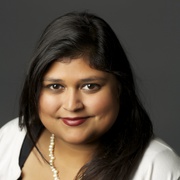 Three years ago, I boarded a train in New York City and headed toward Washington after an emotionally draining day at the UN General Assembly. Little did I know that aboard Amtrak 2119, I would have a chance run-in with former Vice President Joe Biden.

I have always looked forward to meeting like-minded colleagues and global citizens to talk about challenges facing our world. But 2017 was different. This was President Donald Trump’s first UNGA speech, which began with “America First” and ended with “we will have no choice but to destroy North Korea.” This was just weeks after the murder of Heather Heyer by an avowed white supremacist in Charlottesville, Va., and Trump’s comment that there were “good people on both sides” of that event.

As the train picked up steam, my colleague noticed the vice president and persuaded me to approach him. On our walk down the aisle, the car swerved and we grabbed for handholds just as we reached his row. Biden looked up and told us calmly, “Sit down, sit down, you're going to fall.” The three of us sat there talking with the former vice president about our families and the saddened state of the country. Forty-five minutes later, we were still talking. Biden shared our concerns about Trump threatening war with North Korea, especially at the UN, a place where countries come together to resolve issues. Later in our conversation, he expressed frustration with Trump’s consistent disrespect of women, especially after spending his career fighting against violence towards women and girls.

In our conversation, I shared how scared I was for my country, my then-15-month-old daughter Asha, and for the state of the world. I told him that I was moved by his remarks about his family when he accepted the Presidential Medal of Freedom. We laughed and talked about how my husband and I recited his parents' Bidenisms, “Remember no one is better than you, and you’re not better than anyone...when you get knocked down, you gotta get up.” He asked about me, my career and my family. I told him about my dad growing up as an impoverished orphan in Calcutta and my mother leaving her small village in Assam at 18 for more opportunities. He said he appreciated hearing my story, and I was humbled to share it with him. It felt like long-lost friends catching up on the train ride home from work.

This August, Biden selected Sen. Kamala Harris, D-Calif., as his running mate. It was a choice that brought me to tears because so many of us see ourselves in Senator Harris. A woman of color, the daughter of immigrants, who is representing our power and impact against the prejudices and weight of history. Throughout her career she has been an outspoken advocate for human rights, women’s rights, and reclaiming U.S. leadership in the world. I am grateful that my now 4-year-old daughter — who is half Indian American, one-quarter African American and one-quarter Guamanian — can see someone who looks like her making history in the United States. Since the announcement, I’ve been excitedly telling all my friends that “Big Asha” is on the ticket.

The Bill for ‘America First’ Is Coming Due

On the train back in 2017, I told Biden that my sister and I owed our accomplishments to our parents for keeping us focused on education and taking us back to India to remember our roots. Biden told me that during one trip to India, he learned that one of his relatives had been a trader and settled in India. There are now five Biden families in Bombay. Biden then said to me with a wink, “You and I might be related.” I replied, “It would be an honor,” to which he said, “You are too kind.”

I wish I had been surprised by Trump’s comments earlier that day, but he already had been undermining U.S. leadership at the United Nations from the outset of his presidency. In his first budget request, he proposed cutting funding for the UN by 44 percent, stating that the UN was “working against U.S. foreign policy interest.” In June 2017, he announced the U.S. withdrawal from the Paris Climate Agreement, a global action plan to fight climate change. He withdrew from UNESCO in October 2017, a UN organization that preserves historical and cultural sites. Later that year, UN Ambassador Nikki Haley said she was “taking names” of UN member states critical of the U.S. embassy’s move to Jerusalem. After a year of warnings, in June 2018, Trump withdrew the United States from the UN Human Rights Council, a move that has weakened our diplomatic clout and ability to counter increasing violence and human rights abuses around the world. Perhaps most egregiously, in May he cut U.S. funding for the World Health Organization in the middle of the COVID-19 global pandemic. As of this week, the virus has killed 210,000 Americans. From day one, Trump’s words and actions were meant to pull the United States back from its historic leadership role at the UN, one that dates to the institution’s founding 75 years ago. For four years, Trump has carried out a decades-old dream of far-right conservatives who have feared the institution and wanted to abandon it altogether.

It is clear that in order to reclaim America’s standing in the world we must start at home, especially during these grim days living through a pandemic and witnessing police violence and injustice against black and brown people. I am hopeful that Biden will restore the Voting Rights Act and work with federal, state, and local officials to address systemic racism in our justice system. I believe a Biden-Harris administration will pursue policies to promote racial and social justice, so that my 10-month old son, Kiran, is judged by the content of his character and not the color of his skin. I welcome a president who strongly and unequivocally condemns white supremacy, and does not harness it for his own political gain.

That day on the train, I got a glimpse that a President Biden would be a leader who could unify America and reclaim the U.S.'s leadership role in the world, where once again we could be seen as an ally, not an adversary.

As the train brought us home from Trump’s disconcerting speech that evening, I felt that Biden restored my faith in humanity, reassured me that our institutions are strong, and reminded me that ‘We The People’ are resilient. Vice President Biden and Senator Harris’ vision for America is one in which my family is not the other but is the fulfillment of America’s promise.

Chandrima Das is a peace and security expert and United Nations advocate. As president of the International Career Advancement Programs Fellows Association, she promotes increasing diversity at senior levels of international affairs and national security. Throughout her career, she has visited eight UN Peace Operations missions across Sub-Saharan Africa, Middle East and the Caribbean. She has previously served as a consultant supporting peacebuilding programs and worked in South Sudan implementing livelihood programs and awareness campaigns to prevent gender-based violence. She lives in Washington, D.C., with her husband and two children.

NEXT STORY: The Future of Chinese Power