Innovation, Partnership Take the Army’s Long-Range Missiles to the Next Level with PrSM
Skip to Content
Get all our news and commentary in your inbox at 6 a.m. ET.
Policy
With 28 Days Left, What Can Congress Do?

Congress is heading out of town for the Fourth of July with less than a month of work left before November's elections. But don’t expect immediate action on crucial national security legislation. By Molly O’Toole

When Congress breaks Thursday for the Fourth of July recess, it will have only 28 days left to work before Election Day.

As members leave town, they also leave on the to-do list the National Defense Authorization Act, more than 50 ambassador nominations to hotspots such as Iraq and Egypt and even expedited, bipartisan legislation to overhaul the embattled Department of Veterans Affairs. The White House and members of both parties are putting the pressure on congressional leadership to act -- but this infamously do-nothing 113th Congress is unlikely to hold votes that could make lawmakers vulnerable before the November midterm elections, leaving crucial national security, foreign policy and veterans legislation in limbo.

The Senate has no finalized plan for amendments or scheduled floor time for its $514 billion Pentagon spending authorization bill -- whether before the July recess or just before November. When asked Wednesday whether the bill would be taken up before the elections, Sen. Carl Levin, D-Mich., told Defense One, “I’m optimistic we’re gonna get a vote this year ... I want to make sure it happens, period. The earlier the better, that’s my goal.”

“I am confident this bill will get to the floor, I just don’t know when,” he said. “I raised it with the [Majority Leader Harry Reid, D-Nev.], he knows. But there’s just so much flying around, I just don’t know, and I don’t think the leader knows when it’s gonna come to the floor either. I’m guessing he doesn’t know because there’s just so many balls he’s got in the air, including a lot of nominations.”

That leaves 28 days -- 16 until Congress lets out for summer recess -- from Aug. 1 to Sept. 8 -- and after that, only 10 days of session left until the end of the 2014 fiscal year. Then it’s just two work days more until a month of stumping in their home districts before polls open on Nov. 4, after which they’ll allow themselves a week off for an electoral hangover.

How Much Time Congress Has Left This Year 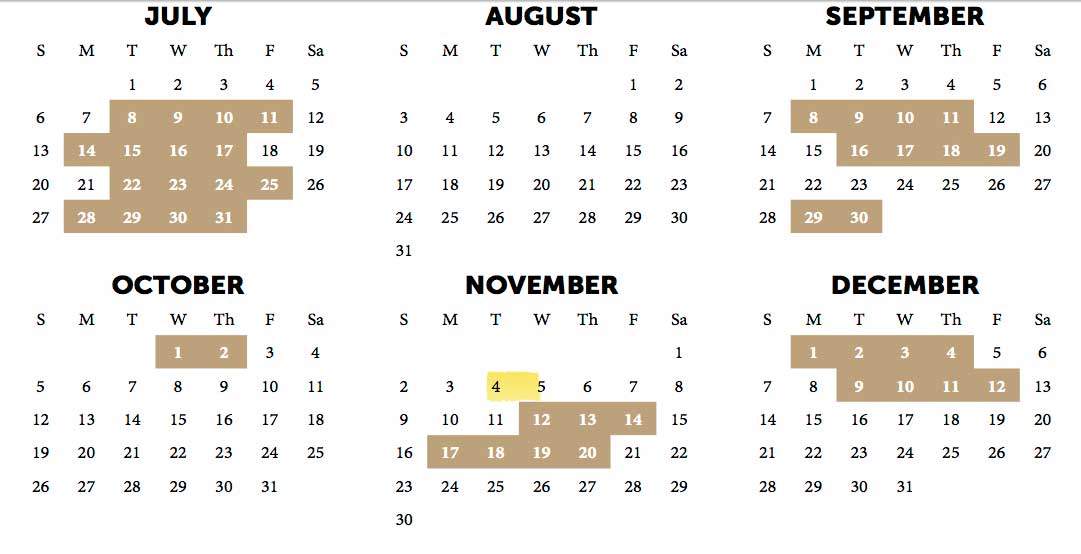 When asked whether or not any delay in the NDAA being brought to the floor may be a political calculation, Levin responded: “I doubt it. I think the leader will try and bring this up, I hope, and I believe, as soon as he can possibly get it up.”

The Armed Services Committee chairman introduced the defense bill on June 2 and placed it on the Senate’s legislative calendar. The House-passed version was received in the Senate and placed on the calendar on June 5.

In the meantime, Levin and Armed Services Ranking Member Sen. James Inhofe, R-Okla., have warned senators to file their amendments before the July recess in order to avoid a repeat of the messy 2013 NDAA passage, in which senators were unable to vote on any amendments because consideration came down to the end of the session.

“We have an awful lot of work ahead of us. We don't have a long time to do it,” Levin said in a statement on the floor June 11. “It's in the national security interest that we have a bill before us … So our colleagues can be very helpful in getting this bill to the floor, meeting the concerns of our nation, doing what we should be doing for our troops and our families.”

Inhofe warned his colleagues on Tuesday, according to DefenseNews, “Republicans, don’t come around complaining to me in December that you don’t have amendments.”

Just a day ahead of the Fourth of July recess deadline, nine amendments to the NDAA have been filed, according to Levin’s office.

Even passage for the VA reform bill -- once a source for optimism, given the momentum following revelations about wait times at VA hospitals and the resignation of VA Secretary Eric Shinseki -- is unlikely to be quick. Lawmakers initially vowed to have a VA fix on President Barack Obama’s desk by July 4 -- now they are merely hoping for a July vote, with members of the congressional conference committee balking at the Congressional Budget Office’s $44-$50 billion annual cost estimate for the legislation and how to pay for it.

And the White House hit Senate Republicans on Tuesday for their “obstruction” of dozens of Obama’s nominees for ambassador postings.

“These crucial posts are vacant and American interests are therefore underrepresented. The longer we wait to fill these roles the harder it becomes to maintain our effective American diplomacy,” Obama’s National Security Advisor Susan Rice said in a statement. ”It is critical to our national security that America fields a full team in our global engagement.”

On Tuesday, Senate Foreign Relations Chairman Sen. Robert Menendez, D-N.J., added 11 more to the number of pending ambassador nominations, including for crucial posts in Iraq, Egypt and Qatar. A vote on ambassadors to Iraq and Egypt is planned for Thursday. So far, 51 nominations for ambassador have been approved by the committee but not on the floor, according to Menendez spokesman Adam Sharon. And Rice noted that the 26 nominations on the calendar and eligible for confirmation by the Senate have been waiting an average of 262 days.

“They [Republicans] have consciously chosen a strategy to do nothing, pass nothing, approve nothing, and leave key diplomatic posts unfilled for months -- threatening national security and our ability to conduct foreign policy,” Menendez said on the Senate floor on June 18.

“There are 28 days left in session before the November election, and the number of ambassadors that the Senate Foreign Relations Committee will approve will only increase between now and then,” Sharon said Wednesday.

The Obama administration’s 2015 war funding request -- with money for Afghanistan, though reportedly not for Iraq -- is due to Congress any day now, Pentagon Comptroller Robert Hale said Tuesday. It will join other appropriations bills to provide fiscal year 2015 funding to agencies crucial to national security and foreign policy -- from the Department of Homeland Security to Veterans Affairs to State -- all recently introduced and placed on the calendar.

But the days left on that calendar are rapidly disappearing into the productivity black hole that is the November midterms.

As expected, each party is attempting to pin the inactivity on the other. But recent reports indicate that even Senate Democrats are pressuring Reid to let them make more votes, including Senate Armed Services Committee members Sens. Claire McCaskill, D-Mo., and Angus King, I-Maine, who caucuses with the Democrats.

King confirmed through his spokesman, Scott Ogden, that he is involved in discussions about leadership allowing more amendments to come to a vote. "Senator King has consistently expressed concern with the slow progress on many of the important issues facing the country," Ogden said, "but he will continue to work with his colleagues, regardless of political party, to try to forge the practical and effective solutions that the American people deserve."

Despite the pressure -- from both the calendar and Congress itself -- it’s unlikely substantial legislation on national security and foreign policy will be signed into law before November -- not the least because of the risk of votes being wielded against vulnerable Senate Democrats, trying to hold onto their majority. Yet, while crises continue to rapidly escalate around the world, as Menendez said, “No nation can hear what we have to say if we are not there.”

[Editor's Note: This story has been updated.]

NEXT STORY: Iraq Is the First Major Test of Obama's Revamped Foreign Policy