Innovation, Partnership Help Lockheed Martin Take Long-Range Missiles to the Next Level
Skip to Content
Get all our news and commentary in your inbox at 6 a.m. ET.
Policy
It’s Too Early to See a ‘Trump Effect’ on NATO Spending

The U.S. president's rhetoric may have allies talking about their growing defense spending, but it won’t affect most budget proposals for months.

To hear President Donald Trump tell it, his tough talk has already persuaded NATO allies to spend more on defense. But while it’s true that many of the countries are upping their military funding, almost all of those increases were proposed in budgets created before his election.

When Trump met with NATO Secretary-General Jens Stoltenberg on Wednesday, he once again urged the rest of the alliance’s member states to meet their pledges to spend 2 percent of GDP on defense.

Trump didn’t repeat his February claim that “the money is pouring in” to NATO “based on our very strong and frank discussions,” but did reverse his previous designation of the alliance as “obsolete.”

And Stoltenberg praised the president’s hardline stance on defense spending: “We are already seeing the effect of your strong focus on the importance of burden-sharing in the alliance,” he told Trump in his opening remarks at the joint press conference after the meeting.

Still, it’s too soon to credit Trump for policy changes, he said.

“There may well be a Trump effect on European defense spending, but it is way too early to tell,” Nordenman said. “Any increases will require political decisions by parliaments — bills need to be prepared, and votes need to be taken — so it’s too soon to tell.”

A look at the calendar shows why. Because all but three NATO states use fiscal years that mirror the calendar year, the vast majority had already outlined 2017 spending plans by the time Trump was elected last November. Of NATO’s 28 members, five were already hitting the 2-percent target, while 18 more had introduced their budgets to their legislatures. (Under the parliamentary systems of most European allies,  defense budgets don’t change as much once they arrive at the legislature.) That leaves just four countries whose 2017 budgets were even potentially swayable by the new American president: Canada, Croatia, Spain, and Romania. 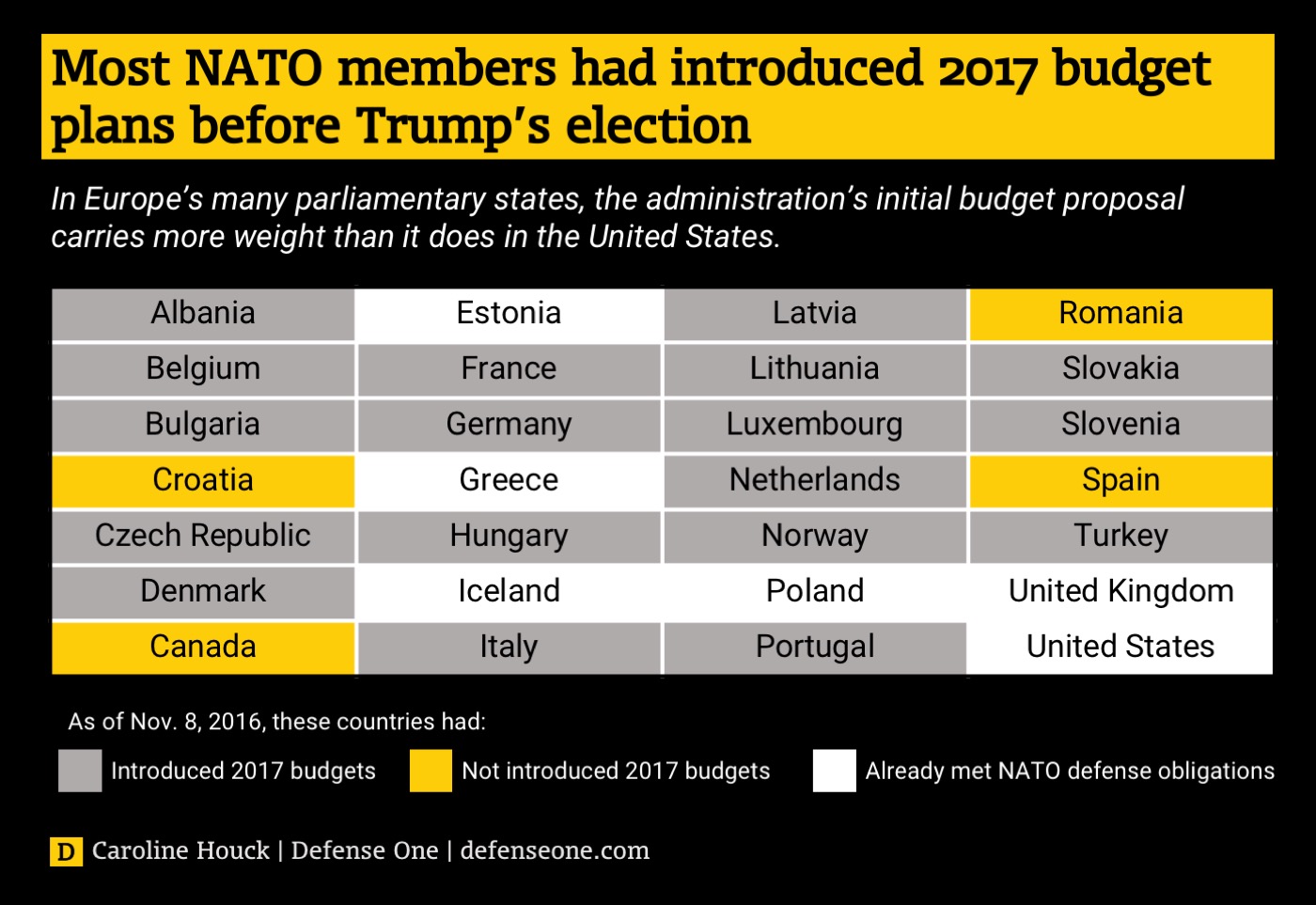 Indeed, some of the 22 had locked in their spending plans long before Trump was named GOP nominee, thanks to multi-year plans for security policy and defense spending that dictate total military expenditures. Denmark, for example, passed a five-year defense agreement in 2012 that outlined spending levels through 2017. Slight adjustments can be made, but don’t expect any Trump effect until a new agreement is negotiated this year. (The Pentagon also issues five-year budget plans, but they are only spending forecasts. Congress must reauthorize defense spending annually.)

As of now, all of continental Europe’s NATO members have approved their 2017 budgets (save Spain, where political turmoil delayed the budget proposal last month). Many will start drafting 2018 budgets in coming months for submission to legislatures in the fall. Last year, more than half those countries waited until October or later to introduce budget acts.

So when Secretary of State Rex Tillerson told an assembly of NATO’s foreign ministers to arrive at the alliance’s next gathering either meeting the 2-percent target or with plans to get there, it functionally meant the latter.

The 2-percent goal has been around for more than a decade, and NATO heads of state formally took a (non-binding) pledge to start raising defense spending at the Wales summit in 2014. By that point, many countries’ budget processes were too far along for the pledge to affect 2015 spending levels.

“The allies agreed in 2014, for the first time at the heads-of-state level to, one, immediately stop the cuts in defense spending, and two, for those countries that weren’t at 2 percent to be at 2 percent no later than 2024,” said Ivo Daalder, the U.S. ambassador to NATO from 2009 to 2013. “If you just look at the curve of defense spending, you’ll see that it bottomed out in ’15 and started to rise in ’16.”

“Last year was the first year that was the trend was not down in terms of percent of funding of GDP across the 28 nations. It turned up,” Gen. Curtis Scaparrotti told lawmakers last month. “This year it was an increase of 3.8 percent, I think it is. But 22 nations have increased their budget this year.” 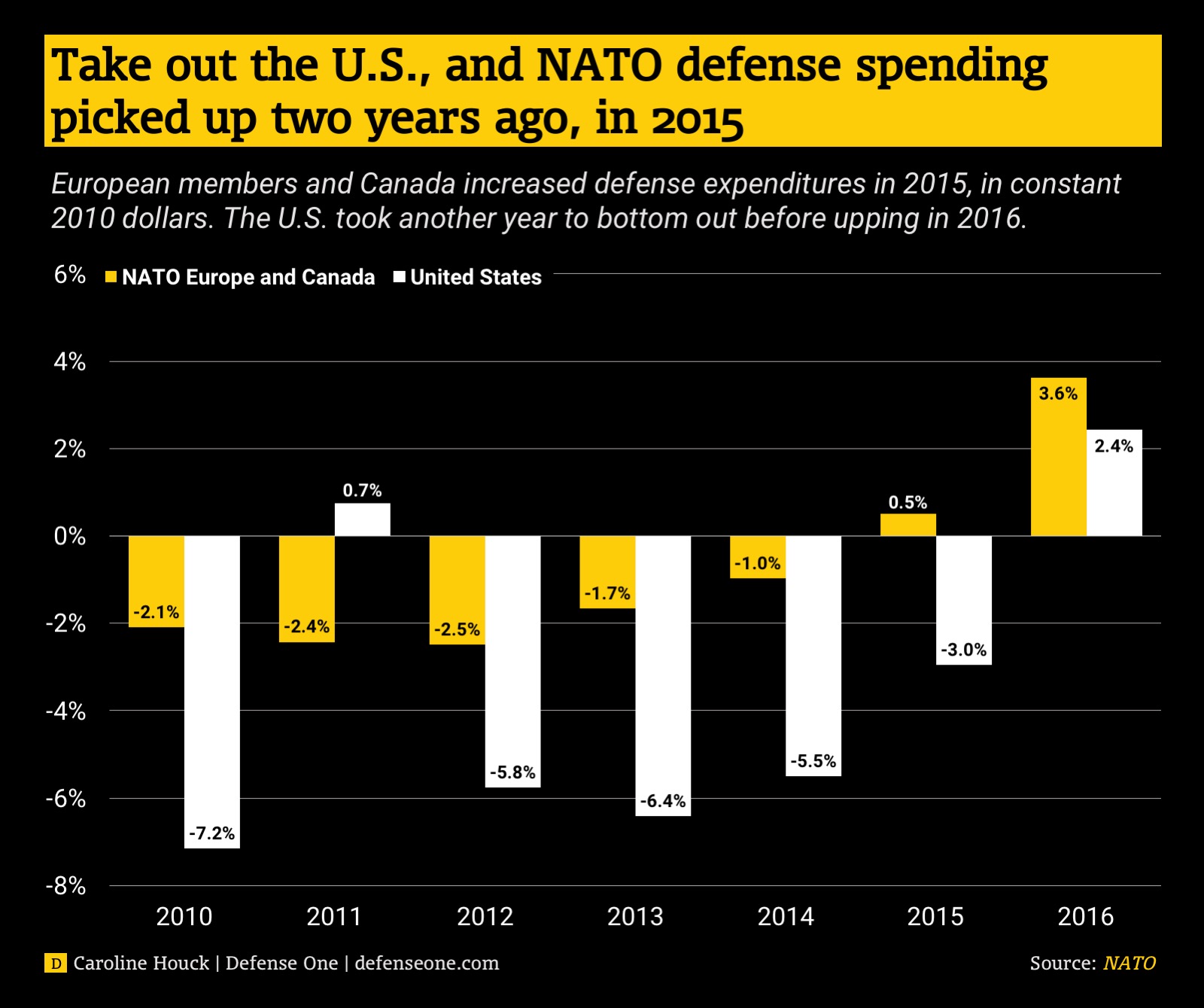 In fact, the U.S. is the main reason that total NATO defense spending continued to decline in 2015. Combined spending by NATO’s European members plus Canada grew by half a percent — that’s the figure Scaparrotti was likely referring to in the hearing — but could not compensate for the decline in U.S. defense spending, which fell $17.6 billion (in constant 2010 dollars). 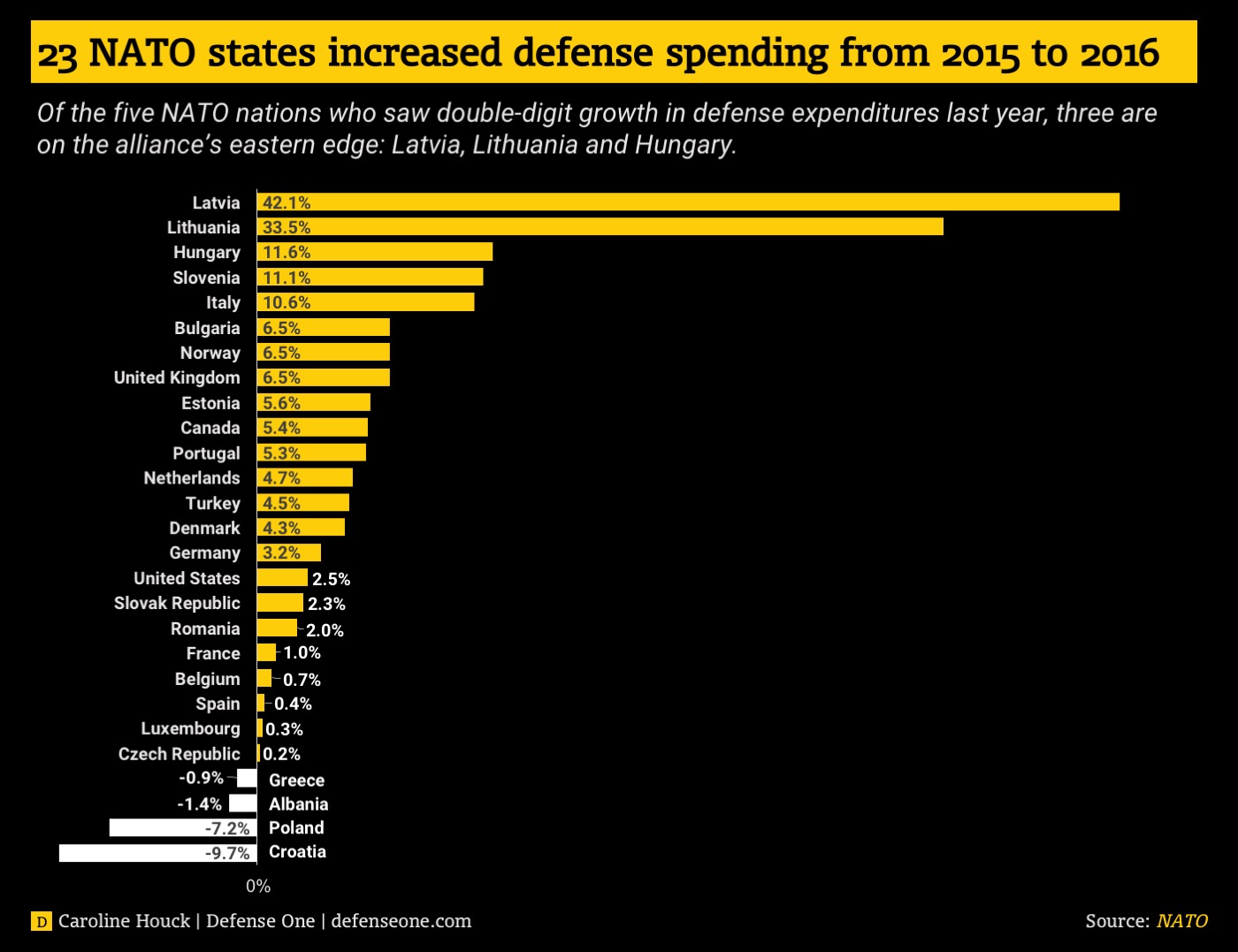 So if it’s not a ‘Trump effect’ — yet — what has driven the resurgence in NATO’s defense spending?

In a word, Russia. Yes, instability in the neighboring Middle East and North Africa also concerned alliance heads of state when they met in Wales in 2014, but Russian President Vladimir Putin’s actions topped their lists.

“Russia’s actions starting in Ukraine, but also its continuing actions to increase its own capability, … that has raised the concern among Europeans about their security in a way that really hasn’t happened since the late 1980s,” said Daalder, who now serves as the president of the Chicago Council on Global Affairs.

That concern is evident if you look at the original 2014 declaration or at which countries are already hitting the 2 percent of GDP target. Outside the U.S. and the special-relationship United Kingdom, two of the remaining three countries are former members of the Soviet bloc that border Russia: Estonia and Poland. 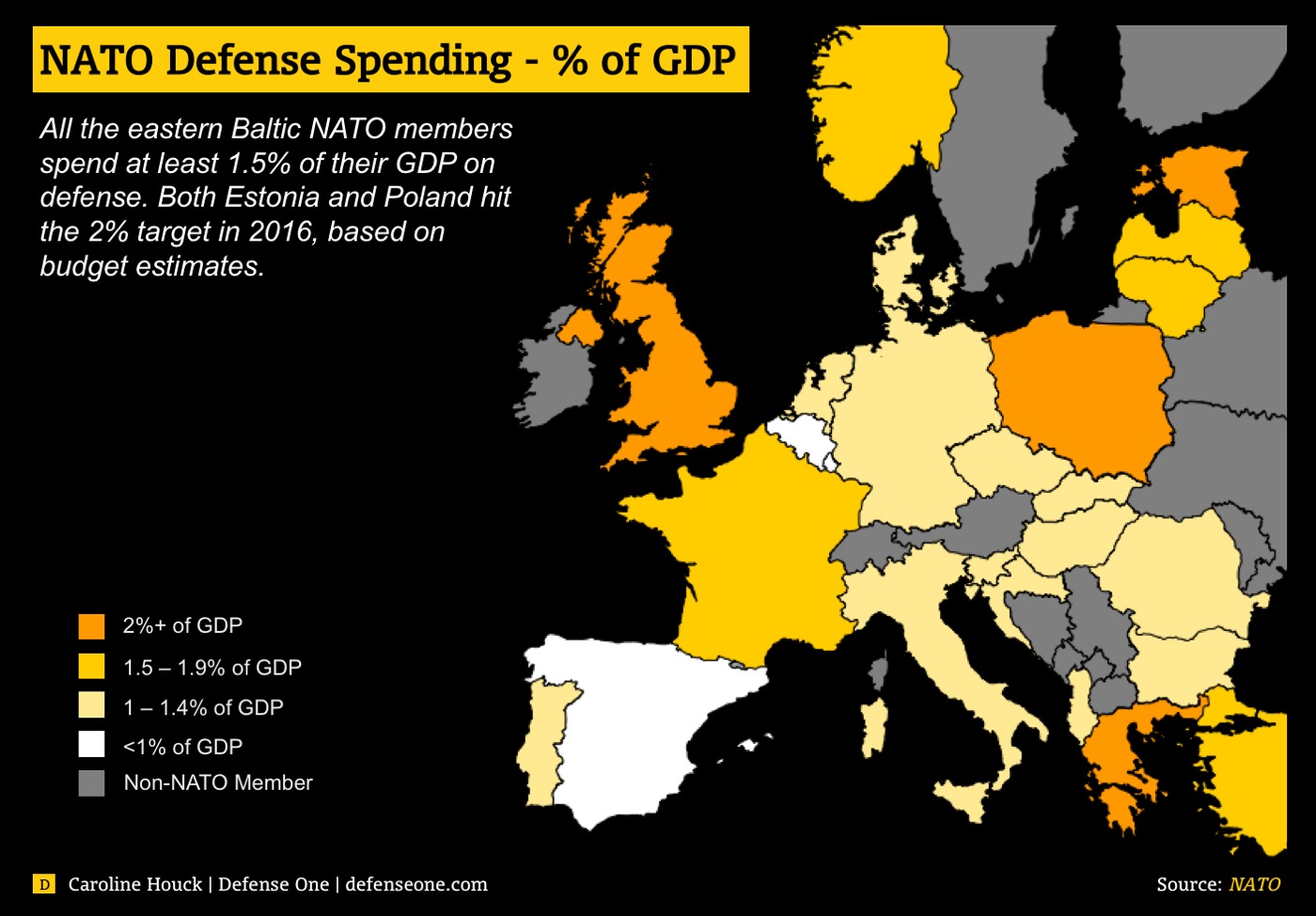 The Czech Republic — another of the NATO members that plans defense spending as part of multi-year strategies — updated its plans in 2015. Those documents increased spending levels and pointed to Russian actions as a major threat.

And again, take a look at who led the efforts to ramp up defense spending in 2016: the countries closest to NATO’s eastern flank. Latvia and Lithuania, for example, had the largest growth rates, with 42.1 and 33.5 percent in annual real change, respectively. Neighboring Estonia already hit the 2 percent of GDP target in 2015, but also upped its defense spending in 2016.

“Russia's actions vis-à-vis its neighbors show a disturbing and worrisome trend that we have to reckon with,” Latvia’s ambassador to the U.S., Andris Teikmanis, said on Capitol Hill last month.

In the same hearing, Poland’s ambassador put it more bluntly, saying Russia is a threat “to the whole western world or transatlantic alliance.”

To understand the past and next few years of defense spending growth, Daalder, the former NATO ambassador, said look to Moscow, not Washington.

“My view of it is that Vladimir Putin is far more responsible for increases in defense spending than Donald Trump,” he said.

And that’s what Scaparrotti told lawmakers last month: NATO Europe and Canada had collectively begun spending more largely in response to Russia’s occupation of Crimea and other activities.

But if Trump’s demand has yet to affect allies’ military budgets, it has brought the issue to the forefront of their minds.

“I think [the president’s] comments have helped elevate the issue,” Rep. Mac Thornberry, R-Texas, said after chairing a House Armed Services Committee hearing last month. “So when they come see me they tend to raise it early, because they know it’s important to us — and that’s good. That’s a good thing.”