Next Generation Interceptor: The Nation’s Next First Line of Defense Against Ballistic Missile Threats
Skip to Content
Get all our news and commentary in your inbox at 6 a.m. ET.
Science & Tech
How Genes Could Predict Who Will Get PTSD

Can you predict post-traumatic stress disorder before it starts? By Patrick Tucker

Can you screen for post-traumatic stress disorder in the same way you screen for breast cancer? A new paper from researchers at the Mount Sinai School of Medicine suggests that gene expression could reveal which individuals are most likely to develop PTSD, a development that could accelerate the search for a therapy to effectively pretreat the disorder through a pill.

The researchers from the Icahn School of Medicine at Mount Sinai took a group of male and female rats and traumatized them by exposing them to the smell of cat urine. Seven days later, the researchers separated those rats that were displaying PTSD-like symptoms from those that coped with the stressful event. An analysis of the gene expression in the animals showed suppressed glucocorticoid receptor signaling in their brain and blood of the PTSD-stricken rodents.

The way your glucocorticoid receptors signal in the face of traumatic stimuli affects the way the hippocampus and the amygdala process the memory of events. The hippocampus serves, in a way, as the brain’s Google. When a person is confronted with new experiences in the form of visual, auditory, and other stimuli, it’s the hippocampus that searches through the brain’s memory to find relevant files to inform the person’s response. Loud noise = explosion = run. The amygdala controls the brain’s fear level, effecting how we experience stimuli and how charged are our memories after the fact. To carry the Google metaphor a bit further, the amygdala affects page rank. Glucocorticoid receptor signaling can change the way all of these parts of the brain work together. The research revealed some of the pathways and networks of gene expression that allow the receptors to go off track.

“We measured 22,500 genes and when you measure all those genes you can do computational analysis that gives you the transcription factors and the pathways. So what you can do is you can understand, through computation, what the networks are,” Dr. Rachel Yehuda, director of the Traumatic Stress Studies Division at Icahn School of Medicine at Mount Sinai and the study’s lead author, told Defense One

Here’s what Yehuda's research means: we’re one step closer to treating PTSD long before it ruins the lives of those it affects and, in the case of soldiers, costs the government a lot of money. To further test their theory, the researchers gave some of the rats a hormone called corticosterone, (CORT -- equivalent hormone of cortisol for rodents) about an hour after exposing them to the cat urine. They then re-tested them seven days later and found “in both sexes, CORT preventive treatment was associated with lower anxiety behavior in [predator-scent-stress-exposed] rats,” according to their paper, Expression Profiling Associates Blood and Brain Glucocorticoid Receptor Signaling with Trauma-Related Individual Differences in Both Sexes, which was published in the Proceedings of the National Academy of Sciences on Aug. 11.

The relationship between low cortisol, stress, and susceptibility to PTSD has been established for decades, but therapies that use cortisol to prevent or pre-treat stress are still in the experimental phase, and some of the most ambitious work is taking place outside of the United States.

To understand the future of PTSD diagnostics, you have to go to an emergency room in Israel.

Picture an Israeli soldier walking into a hospital after a rocket attack. He’s displaying minor cuts but he’s more agitated than some of the other victims who have come in with far worse injuries. An attending doctor gives the patient a pill, not a sedative to change his mood but an experimental cortisol therapy, in the hopes of changing the way the soldier’s brain is processing the event.  If the treatment is successful, the memory of the bombing has become less salient, and will lose its emotional charge. A person who would have developed PTSD is spared the affliction. It’s research that Yehuda has been collaborating with on for about three years now under Joseph Zohar, head of the psychiatry department at Israel’s Sheba Medical Center. The research is funded by the National Institute of Mental Health.

Yehuda’s work takes that research to an important new level, helping, potentially, to ensure that that therapy only goes to those individuals who would benefit from it so doctors aren’t juicing people’s cortisol levels willy-nilly. “The problem in the idea of giving a prophylactic treatment is that you don’t want to fix what isn’t broken. You wouldn’t want to try and prevent PTSD in someone you didn’t think was going to get it.”

She says that a handheld diagnostic tests capable of telling a military medic or an emergency room nurse if the patient that they’re dealing with is a good candidate for a cortisol pill is technologically possible today, but unachievable without more data.

The Defense Department has put approximately $600,000 into Yehuda’s research so far, through the award of an initial concept grant of $150,000 and a supplemental grant of $450,000, and has invested millions more in clinical studies. 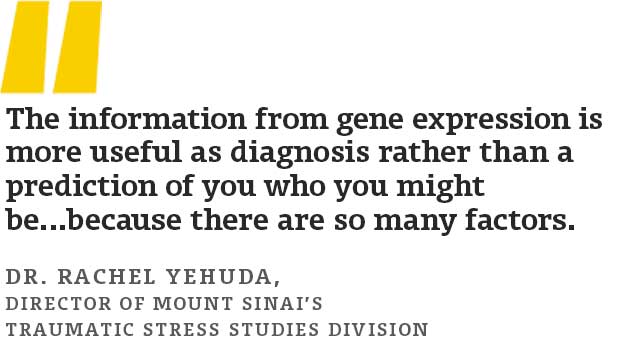 Any discussion of genetic diagnostics should touch on the policy implications of knowing which individuals are more or less susceptible to illnesses on the basis of molecules. Is it possible to subject potential military recruits to a genetic screen in order to determine which soldiers have the greatest chance of developing PTSD? Is it really so different from the way that certain genetic markers such as the BRCA1  and the BRCA2 gene can indicate an elevated likelihood for developing breast cancer?

A genetic PTSD pre-screening is possible but Yehuda says it’s not the best use of the data (and certainly not the goal of her research.) “Molecular information alone should not determine someone’s fate,” she said. "The information from gene expression is more useful as diagnosis rather than a prediction of you who you might be…because there are so many factors.”

In the same way that are there many ways to cope with an elevated risk for developing breast cancer (and also to avoid it without a mammography), so too can individuals take steps to prevent the development of PTSD even if they want to serve in high-stress environments. “Gene expression biology is not destiny. You can make behavioral changes and other changes…even psycho-therapy can change these glucocorticoid markers,” Yehuda said.  “We’re not using those networks to predict the future. We’re using the data to describe the present moment.

NEXT STORY: Hacker Shows How to Break Into Military Communications