Shifting Left: How DevSecOps Strengthens Agency Security and Risk Management
Skip to Content
Get all our news and commentary in your inbox at 6 a.m. ET.
Science & Tech
Inside Russia's Disinformation Campaign

Moscow is financing legions of pro-Russia Internet commenters. But how much do they matter? By Daisy Sindelar

Like many people with access to the Internet and a holster full of gadgets, Vladimir Nesterenko is living a double existence. In real life, the 49-year-old Kiev native is a published author and darling of the Ukrainian counterculture. Online, he's "Adolfych"—a Russian-speaking mischief-maker who uses his Twitter, Facebook, and LiveJournal accounts to comment, sometimes thoughtfully and often profanely, on the deepening conflict with Russia.

On another post, responding to Russian Prime Minister Dmitry Medvedev's uncharacteristic chest-pounding over a recent round of Western sanctions, he scribbled gleefully, "Podkhuilo razbushevalos," a phrase, playing off Ukraine's favored insult of Vladimir Putin, that might best be translated as "Dickhead Jr.'s freaking out."

Adolfych is opinionated. He certainly has bad manners. But is he a troll? He says no. "I try not to lie. And I'm not on anyone's payroll." This, he says, sets him apart from the leagues of trolls who have become a noisy presence in the comment sections of media and social networks in Russia, Ukraine, and increasingly the West.

"I think most of these trolls are sellouts," Nesterenko says. "This is a category of people who I'm sure are paid some small amount of money, maybe $1,000 a month or less. But they're running legitimate blogs, they keep themselves busy. Sometimes they even publish something interesting. But when it's necessary, they also spread 'deza'"—shorthand for disinformation.

The Kremlin, which has waged a massive disinformation campaign aimed at legitimizing Russia's annexation of Crimea and support for separatists in eastern Ukraine, has employed so-called "troll armies" to invade online territories armed with pro-Moscow rhetoric.

A June article by Max Seddon of BuzzFeed reported the Kremlin was spending millions of dollars to pay English-speaking Russians to promote President Vladimir Putin and his policies in U.S. media like Fox News broadcasting and The Huffington Post and Politico news sites. Trolls are reportedly expected to manage multiple fake accounts and post on news articles 50 times a day, often with sentiments as simplistic as "Putin makes Obama look stupid and weak!"

In order to promote its narrative, the Kremlin has adopted a two-fisted strategy, unleashing its troll armies even as it tightens Internet restrictions at home. On August 1, Russia enacted controversial new legislation aimed at muzzling social media, the last bastion of the country's embattled opposition and a free flow of information about the war in Ukraine. 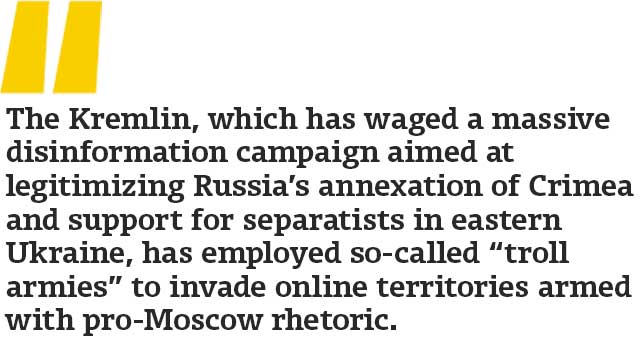 Anton Nosik, a popular Russian blogger and programmer who is sometimes referred to as the "father of the Russian Internet," says the Kremlin is falling back on a time-honored strategy in its propaganda war on Ukraine. But this time, he says, the stakes are higher than ever before. (BuzzFeed reports that at least one trolling company—Internet Research Agency in St. Petersburg—is expected to spend more than $10 million in 2014 alone.)

"Comments were already serving as a well-financed Kremlin instrument of war against the opposition, even five years ago," he says. "So what's going on now is nothing new. But what's absolutely clear is that now they're spending more money on Ukraine than they ever spent against Alexei Navalny, or Ekho Moskvy, Kommersant, Gazeta.ru"—Russian media actors who have been targeted by the Kremlin in the past—"and all the rest."

"Kristina Potupchik is probably kicking herself right now," he adds, referring to the blogger, now seemingly retired, who for years led trolling efforts by the pro-Kremlin youth group Nashi. "In her day, of course, there wasn't nearly the budget for Internet pollution as they have now."

Not everyone is impressed. Kevin Rothrock, who monitors the Russian net for the online news siteGlobal Voices, says a torrent of pro-Kremlin trolls is unlikely to shift political sentiment in the United States, where rows over adoption, LGBT rights, and most recently Ukraine have left many Americans with a dim view of Russia.

"So much of Kremlin politics is about signaling, and one motivation for the people behind the trolling might be simply to signal, 'Look, we're doing something here, we're trying to affect the Western media landscape,'" he says. "But public opinion of Russia in the West, certainly in the United States, is not doing well right now. So the idea of being able to change really anything in the way reporters work, or the way public opinion is formed—I just don't think you can do it for $12 million, or even $120 million."

"It's not really feasible, certainly not through these methods," he adds. "I think it's money not well spent."

One thing is certain: Pro-Kremlin trolling is not likely to raise the level of discourse in any political forum. If some Russian Internet pranksters—like the shadowy Shaltai-Boltai, which has systematically leaked a series of confidential Kremlin documents—are playing a highbrow game, rank-and-file trolls are seemingly happy scraping the bottom of the barrel, both in sentiment and in syntax.

Adding to the incivility of the discourse is the fact that some of Russia's highest-ranking officials are themselves enthusiastic trolls. One of the most notorious, Deputy Prime Minister Dmitry Rogozin, Russia's former envoy to NATO, recently summarized the "different values" between the U.S. and Russia by tweeting a picture of Putin cradling a leopard juxtaposed against one of Obama holding a fluffy white poodle. In another post, he tweeted photographs of separatist destruction in eastern Ukraine above the glib boast, "the Don adds bass to its voice."

We have different values and allies pic.twitter.com/aJ1312jJNx

"If you show up at The Washington Post or New Republic sites, where there's an article that's critical of Russia, and you see that there are 200 comments that sound like they were written by 12-year-olds, then you just don't bother to comment," she says.

"You don't participate. It's a way of just driving discussion away completely," she adds. "Those kinds of tactics are meant to stop democratic debate, and they work."

NEXT STORY: How Genes Could Predict Who Will Get PTSD