Inside the Disaster Zone
Skip to Content
Get all our news and commentary in your inbox at 6 a.m. ET.
Science & Tech
Fighting Ebola with Data, Satellites and Drones

Some of the intelligence tools that militaries use to gather intelligence could play a growing role in preventing the worst-case scenario. By Patrick Tucker

Current Centers of Disease Control estimates suggest that the disease could infect more than 1.4 million people by January. To limit Ebola’s spread, researchers need better on-the-ground intelligence about where it’s moving. But the virus’s deadly mortality rate, 70 percent for this strain, makes up-close observation as difficult as gathering data on a deadly human adversary. It’s no small challenge for the World Health Organization or the 3,000 troops that President Barack Obama sent to Africa to help them.

Some of the intelligence tools that militaries use to gather intelligence could play a growing role in preventing the worst-case scenario.

The international health community is relying more and more on the HealthMap database to track new Ebola cases. As Larry Greenemeier lays out in this piece for Scientific American, HealthMap uses text analysis algorithms to scan the Internet for news, social media posts and other pieces of recent content that speak to disease upticks or health events of consequence.

“HealthMap automates data acquisition, filtering and characterization of information so that it flows from the source through to the Web page without any human intervention,” Greenemeier explains.

The system functions a great deal like several Internet reading robots that the military has funded through programs like Open-Source Indicators, a 2011 program from the Intelligence Advanced Research Projects Agency, IARPA, to scan published news reports, tweets, and other web data for early signs of war, conflict, discord or simply events of geopolitical significance.

One of the projects that competed for IARPA money as part of that program was The GDELT Project  database, a project spearheaded by Georgetown University professor Kalev Leetaru. Leetaru’s database successfully predicted the unrest in Ukraine before even President Yanukovych’s exodus from the country. He reports on his blog that GDELT spotted the Ebola outbreak about a day before HealthMap picked it up, based on a French language newswire article that observed, amazingly, not the keyword Ebola but “a disease whose nature has not yet been identified has killed 8 people in the prefecture of Macenta in south-eastern Guinea … it manifests itself as a hemorrhagic fever…”

Today, Internet-reading robots like GDELT will likely be the first sources of intelligence when the outbreak spreads to more countries. But, as Danielle Elliot points out in this piece for The Atlantic, programs like HealthMap show serious gaps when it comes to modeling human behavior. 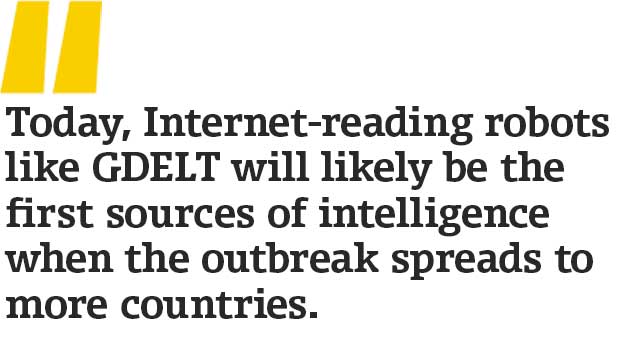 The sort of detective work that operatives in the field do after a bombing or terrorist incident is already coming to play in Africa. So-called “contact tracing” essentially creates a network model around an infected person's associations, acquaintances and personal interactions in order to figure which potential victims to focus on and deploy scarce resources accordingly.

Yes, you can see Ebola from space. Or at least, you can see its effects. In the same way that satellite imagery can provide a sense of how Russian forces are mobilizing on the border to Ukraine, so, too, can high-resolution pictures from low Earth orbit give a picture of where more sick people are showing up.

A sudden Ebola outbreak, viewed from space, may look like an unusually crowded hospital parking lot, at least according to a recent paper written by researchers at Virginia Tech, Harvard Medical School and Boston Children’s Hospital.

They looked at 2,564 satellite images of hospital parking lots in Mexico, Chile and Argentina and created a model to predict parking lot occupancy, as it related to peak influenza cases. They found that they could predict influenza peaks with, in the case of Mexico, a mean square error rate of .0074, which is generally considered very good.

Of course, a hospital parking lot in Central America during flu season is very different from one in Liberia during an Ebola outbreak, but that doesn’t mean the factors are invisible. They’re just more difficult to trace.

DigitalGlobe sells high-resolution satellites images to the government but they also offer analysis on satellite intel. Dr. Colleen McCue, DigitalGlobe’s senior director of social science and quantitative research, does predictive analytic research on what groups like the Congo-based Lord’s Resistance Army, LRA, in Africa are going to do next, based on indicators visible form space. McCue says that unknowns can be accounted for, somewhat, by combining better human behavior models with satellite imagery models. Yes, she says, Ebola movement can be predicted with enough data. 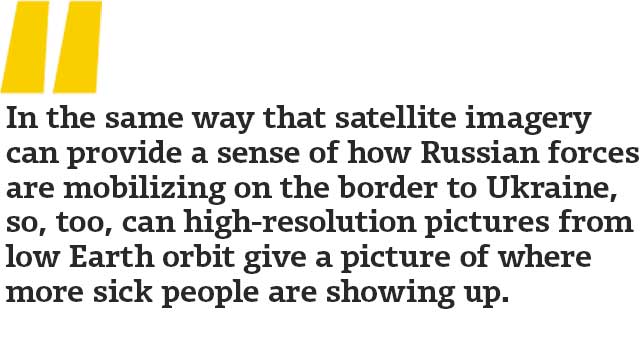 “We can incorporate hundreds of variables, as they are available to understand the environment.” Some of these questions she would consider in analyzing Ebola spread can include how terrain, political factors, infrastructure, even culture could influence where people are going to seek help. “What makes the locations where these incidents are occurring similar to each-other. Unlike traditional models, we can look at where [Ebola] may hop and where it may show up.”

According to McCue, one “scary vector,” or factor, in the current outbreak is how people use cabs and taxis to arrive at hospitals. “Someone’s sick, they call a cab to take them to the hospital, they may be shedding the virus [via fluids] in the cab. They reach the hospital and there’s no beds; then they go home and they’ve contaminated these cabs.” It’s the sort of subtle clue you can catch from space, with enough time, patience and, most importantly, attention. That’s where drones come in, which could provide more eyes on potential hotspots.

The United States is already moving more of its military drone assets into Africa, where the U.S. successfully hit Ahmed Godane, one of the co-founders of the militant group al-Shabab during the first week of September. Near the same time, the U.S. military announced that they would be setting up a second drone base in the country of Niger.

Gen. Frank Gorenc, commander of U.S. Air Forces Africa, recently told Defense One that the drawdown of forces in Afghanistan was opening the possibility of better drone-based intelligence, surveillance, and reconnaissance [ISR] across Africa. “The possibility is there,” he said. “The request and the approval process has to go through the Pentagon but the persistent ISR that has not been available because of the combat ops may become available.”

Drones, accompanied with satellite images and models, have already proven an extremely effective surveillance tool in the fight against poaching and could be effective in tracking people who are less inclined to hide than are poachers.

The possibility also exists to equip African partner nations with drones to allow them to do more of the intelligence gathering on their own. But Gorenc sought to manage expectations on this point. “The business of remotely piloted aircraft is very complex,” he said.

The Threat of the Ebola War

In addition to the other misery it has caused and the risk of governments destabilized from within, the Ebola crisis is also raising the prospect of war between two old foes, Liberia and Sierra Leone.

On Sept. 23, Lewis Brown, the information minister for the country of Liberia told Agence France Press that “the world cannot wait for Liberia, Sierra Leone and Guinea to slip back into conflict, which could be the result of this slowness in response.” 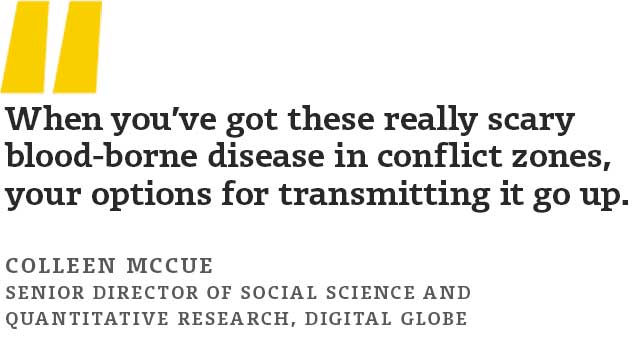 Col. Michael Samura, spokesperson for Sierra Leone’s military, told Voice of America news on Wednesday that that country was moving more troops to the border with Guinea and Liberia. “Guinea had initially started this kind of increased security presence, so we are just following suit to at least complement the effort, the effort of stopping this cross border Ebola virus.”

Additionally, militant groups across Africa, such as LRA, will exacerbate the plight of health workers. Sick patients displaced by fighting are more likely to carry the disease to more places where sanitation is even worse than the place that they were previously. Then there’s the ugly reality of two bloodlettings colliding. “When you’ve got these really scary blood-borne disease in conflict zones, your options for transmitting it go up,” McCue said. “If the RLA goes and wipes out a village and one of them is sick, that’s potentially problematic.”

Last week, President Barack Obama dispatched 3,000 troops to Africa to assist with the effort to combat the spread of Ebola.

At the United Nations on Thursday, Obama warned that the Ebola could become a global security crisis.

“This is also more than a health crisis. This is a growing threat to regional and global security,’ he said. “In Liberia, in Guinea, in Sierra Leone, public health systems have collapsed.  Economic growth is slowing dramatically. If this epidemic is not stopped, this disease could cause a humanitarian catastrophe across the region. And in an era where regional crises can quickly become global threats, stopping Ebola is in the interest of all of us.”

The administration wants to spend as much as $1 billion on operations there. Sen. Jim Inhofe, R-Okla., the ranking Republican on the Senate Armed Services Committee, is reportedly holding up the award until he sees a plan for protecting service members and the mission becomes better defined. The United Nations has reportedly estimated the cost of arresting the epidemic at $600 million. But as Bloomberg’s Diane Brady makes clear, “A month ago, the figure was just over $70 million.”

Today, the U.S. military personnel fighting Ebola in Africa are setting up tents and other emergency medical facilities, not directly interacting with Ebola patients. A Defense Department spokesmen told Defense One "We are still in the very early stages of coordinating the DoD support to the overall U.S. Ebola response, which is being led by USAID. We have established a joint force command, [JFC] under the direction of Maj. Gen. Daryl Williams, in Morovia, Liberia. The JFC currently has about 100 people on the ground there conducting site assessments and coordinating for the future arrival of up to 3,000 military personnel, as directed by President Obama."  But as the illness spreads, so does the prospect of conflict—caused not so much by the disease but by its effects on the government’s ability to keep order.

NEXT STORY: The Navy Wants a Tactical Cloud