4 Ways 5G Is Propelling Government Agencies Toward the Future
Skip to Content
Get all our news and commentary in your inbox at 6 a.m. ET.
Science & Tech
The 5 Coolest Robots at the Biggest US Land Warfare Show

Autonomous systems for land, sea, and sky prowled the floor at this week’s AUSA conference in Washington.

The days when the Army sent in ground troops without robots are long past. At the Association of the U.S. Army’s annual conference, (AUSA) even the trucks were at least partially robotic. As Training and Doctrine Command’s Maj. Gen. Cedric Wins recently said, robot steering offers “advantages that would provide additional protection to forces, or relief, or allow other soldiers to do other things. That’s a key technology as part of the [Force 2025 and Beyond] effort.” With that in mind, here are the coolest robots we found rolling the floor at AUSA: 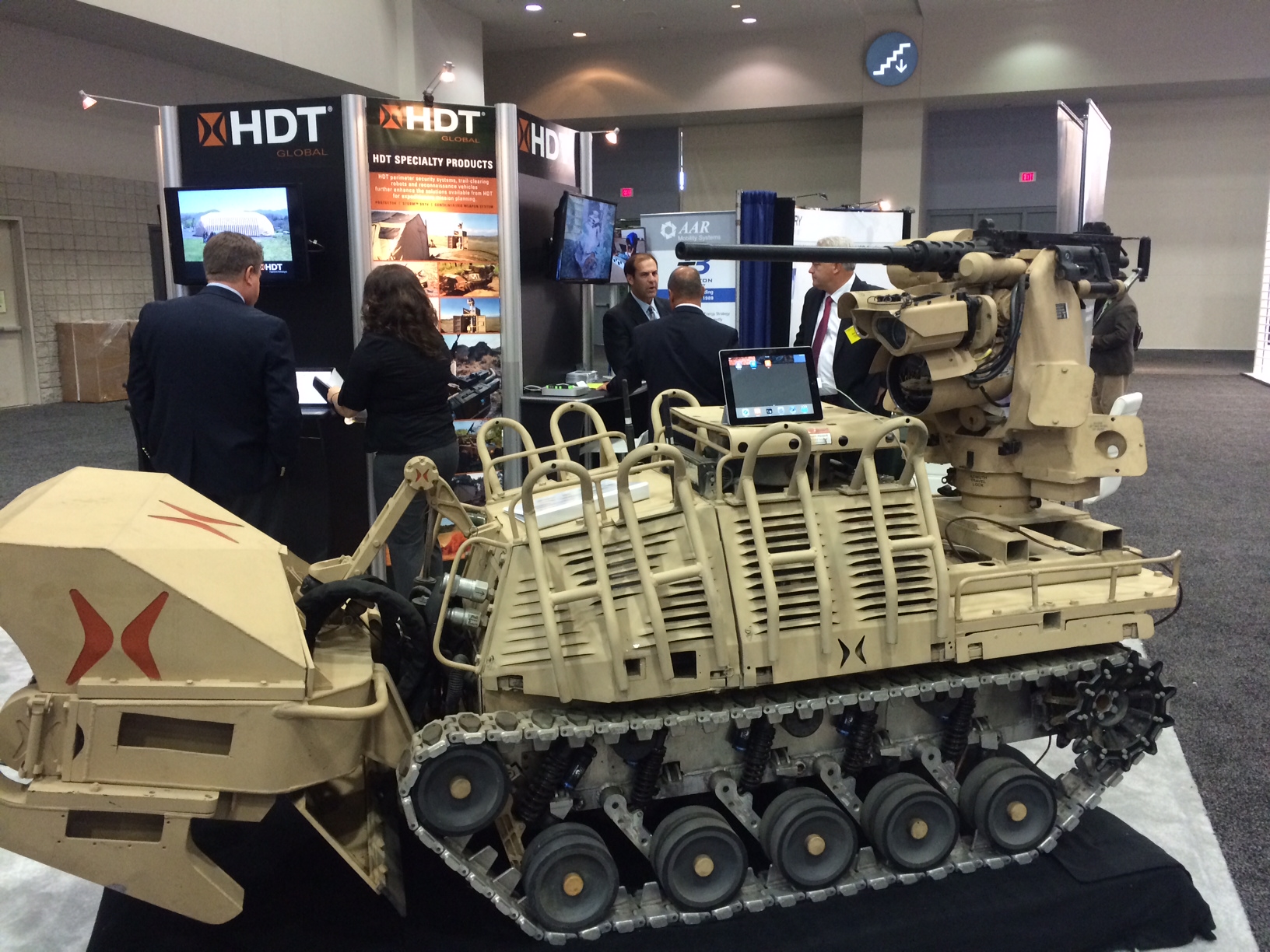 The poster boy for “you’ll shoot your eye out” military technology, the HDT Micro Utility Vehicle is primarily intended as a hauler, capable of carrying 500 pounds (with an additional 500-lb trailer capacity, so 1000 pounds with trailer). Of course, you can also just stick on an ATK minigun and run for cover, but the Army has said that they don’t want guns on ground robots. At least not yet. 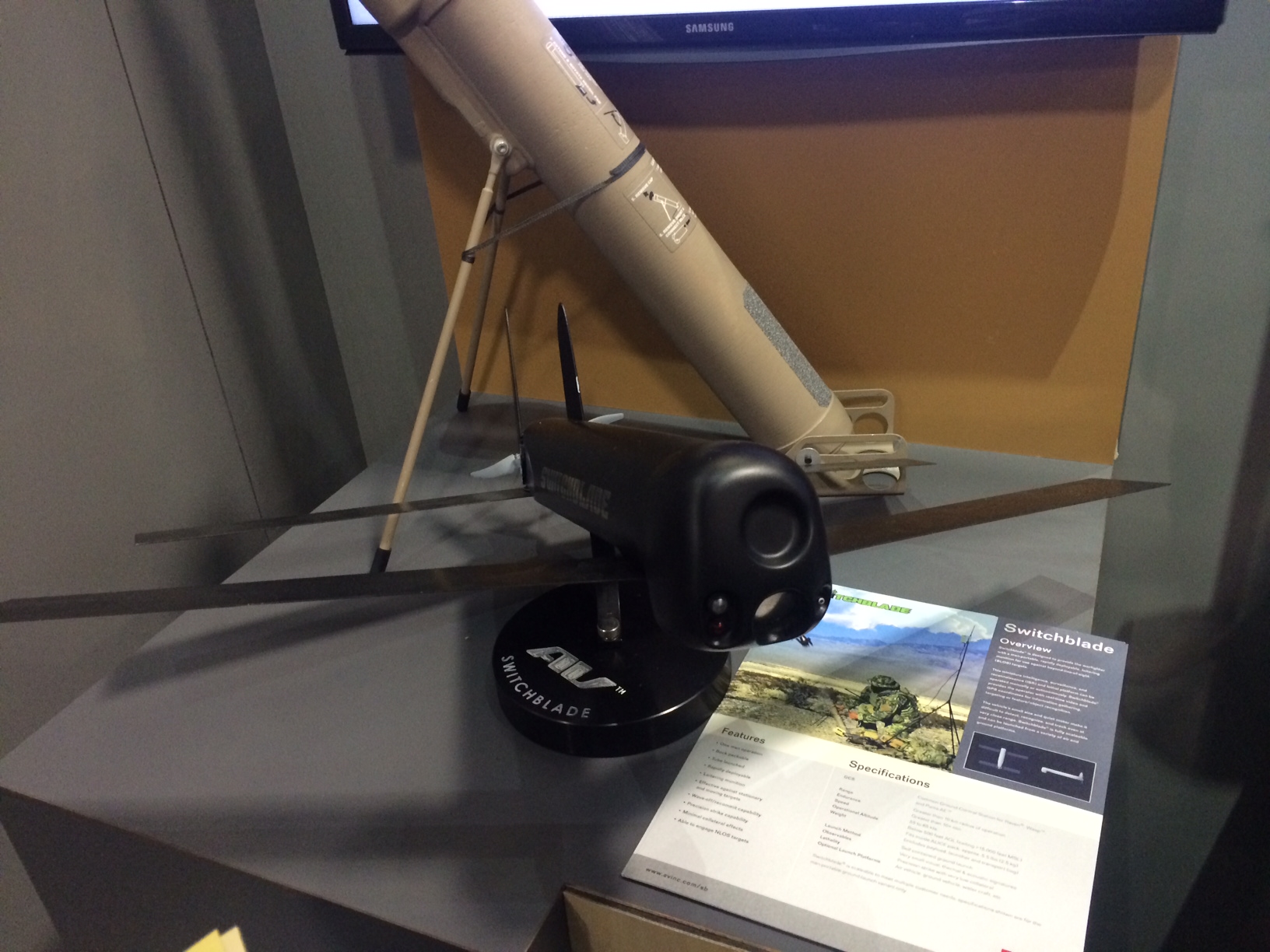 War is hell, but any day that you can shoot a robot out of what is basically a mortar is a great day.

The Switchblade — sometimes called the kamikaze drone — isn’t new. More missile than robot, it can conduct low-level intelligence, surveillance and reconnaissance with a tiny camera. The Army is also reportedly fond of its ability to conduct strikes with less collateral damage than you get from a Hellfire missile.

But it’s the sort of drone that could soon make a leap in capability. Back in April, the Office of Naval Research announced a program called the Low-Cost UAV Swarming Technology, or LOCUST. The goal is to launch 30 synchronized, foldable drones that conduct a series of maneuvers with almost no guidance. The Navy selected a foldable drone called the Coyote, manufactured by Raytheon subsidiary Sensintel and so immediately popular that the Army bought 75 in 2012 and quickly put out an “ emergency needs statement ” for more. And there’s no reason why its maneuver and autonomy software couldn’t be applied to the smaller Switchblade.The Navy’s research program could make so-called lethal miniature aerial munitions systems like the Switchblade a lot smarter in the coming years. 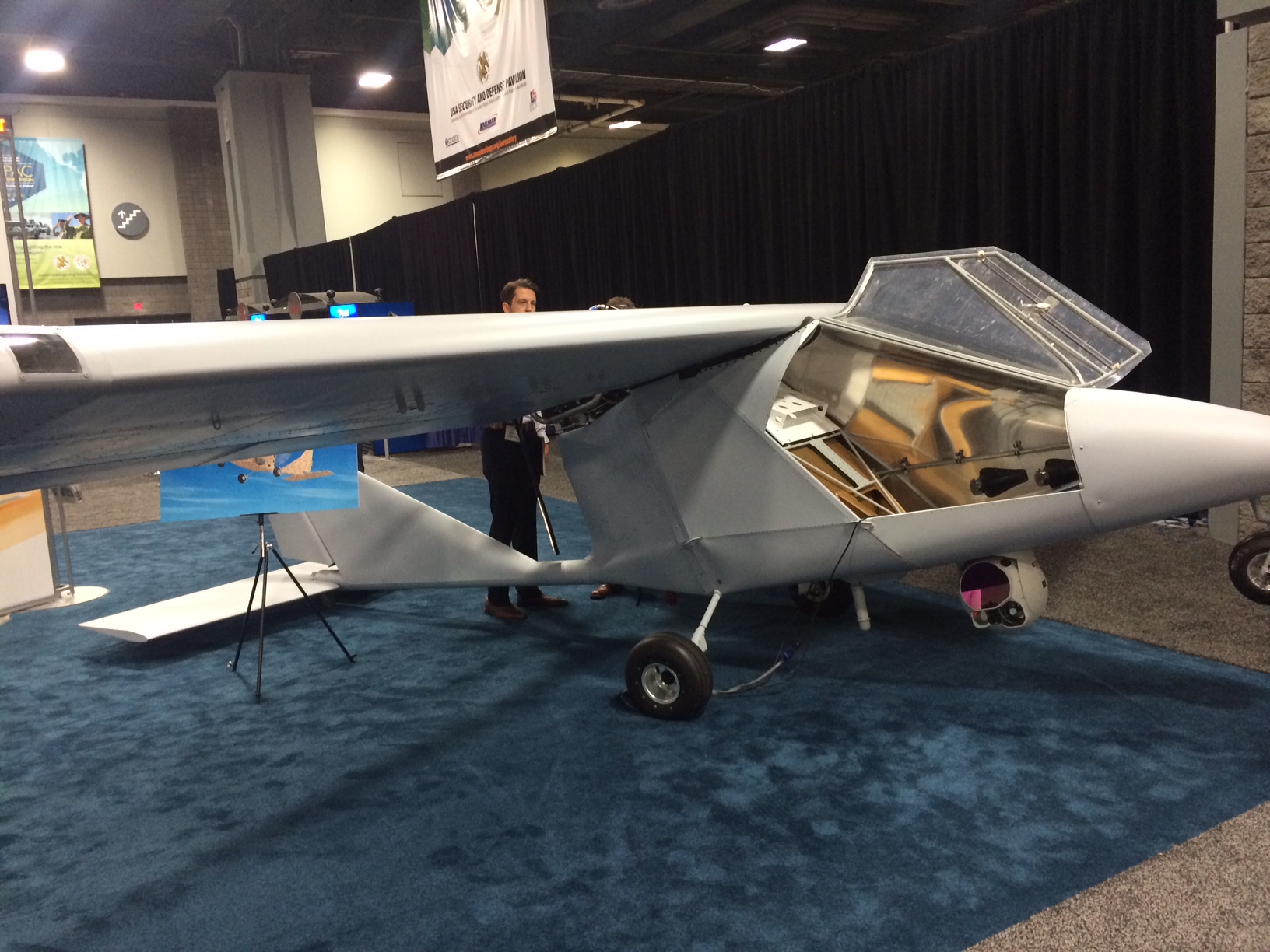 At 19 feet long, with a 26-foot wingspan, the Neany Arrow looks a bit more like a go-kart with wings than a military drone. The top speed is 70 knots, about 80 miles an hour, far slower than the General Atomics MQ-9 Reaper (which can fly at 300 miles per hour). But unlike the Reaper, it has an autonomous takeoff and landing system and requires “no manual flight input from the operators,” according to company literature. Contrast that with a Reaper that requires two separate flight crews, one to launch it and one to fly when the satellite link is established. The Arrow won’t be as capable as its larger cousins, but with those autonomy capabilities it could provide some relief for an over-burdened drone pilot base tasked with round-the-clock intelligence collection. 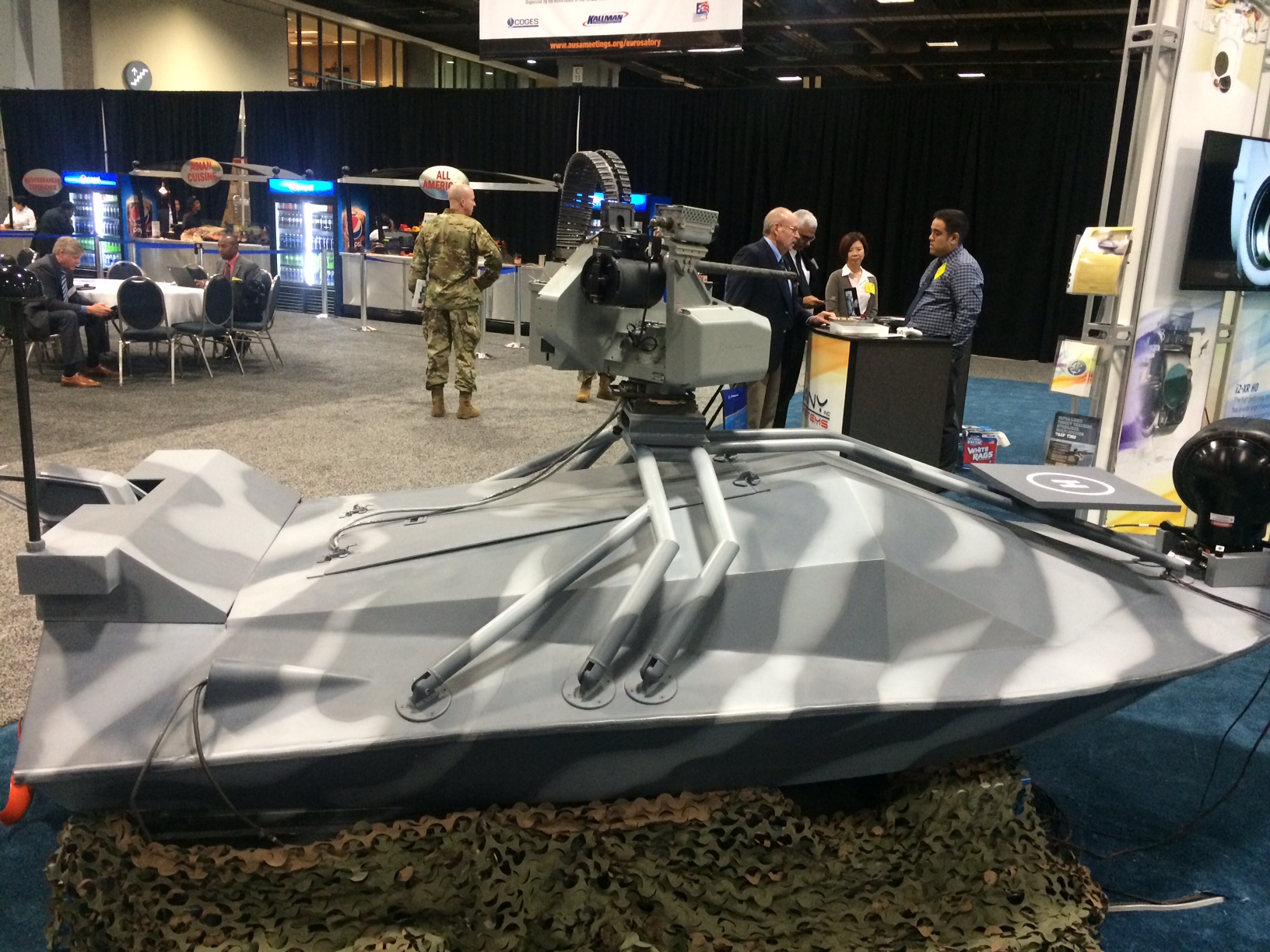 Also from Neany, the DragonSpy looks like the sort of piece of military equipment that comes in the mail when you send in enough box tops, but the Office of Naval Research is keen on building higher levels of autonomy into small boats like this, having completed an elaborate “ swarm robot ” experiment on the James River in Virginia last August. But that was on standard rigged inflatable vessels or RIB boats. At least the DragonSpy fits the part better and provides a better indication of what robot boats will actually look like — no need for piloting controls onboard the robot boat of the future. Neany makes an electric variant with a 3-hour endurance and low acoustic signature. It’s depicted here with an ARES 7.62mm externally powered gun. 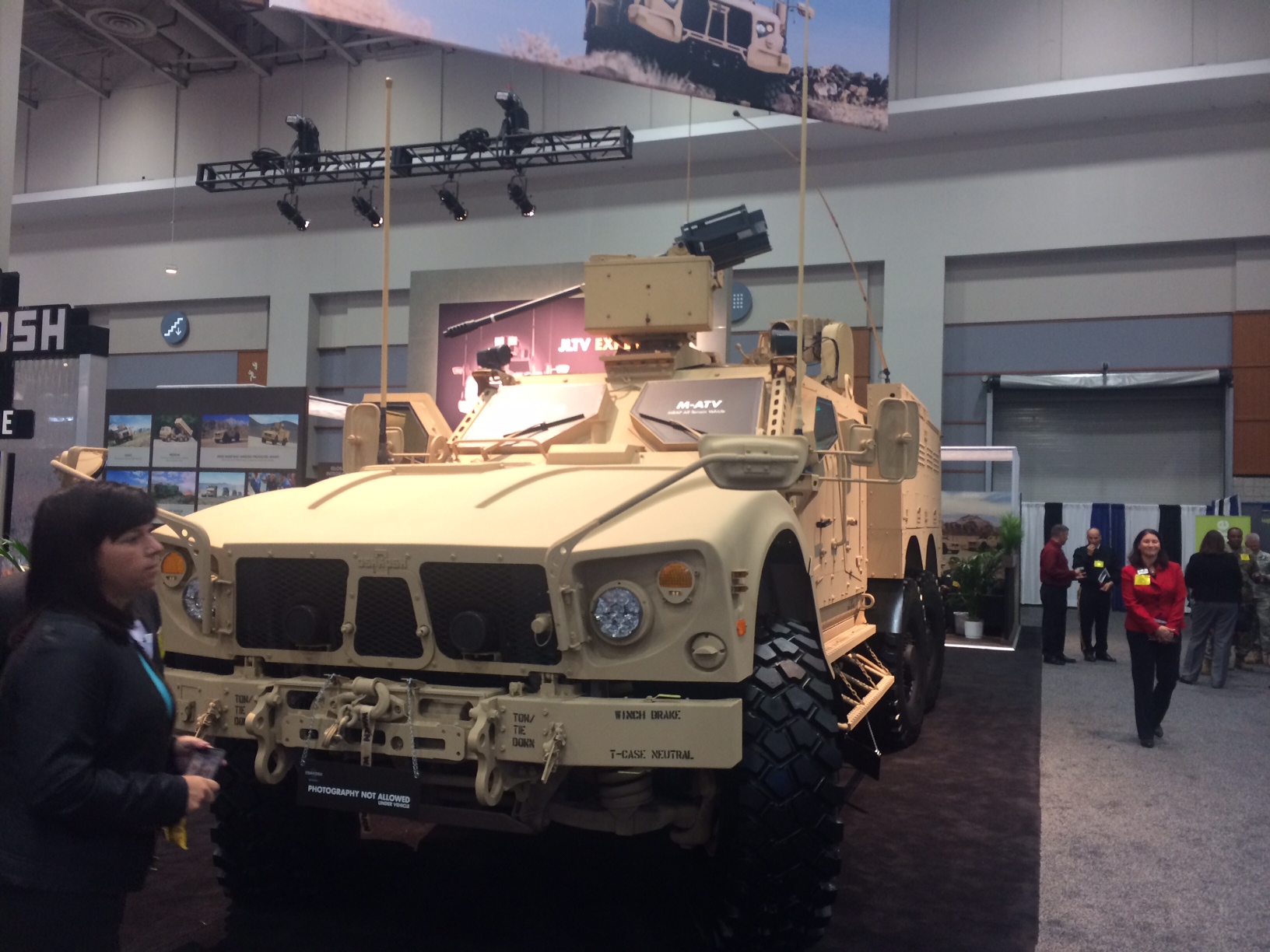 There are concept cars and then there are concept robot trucks. Oshkosh Defense made huge headlines weeks ago when the Army announced that it had selected the company to design the next joint light tactical vehicle or JLTV, the replacement for the Humvee.

The Army currently doesn’t have a program for the M-ATV, which can seat as many as 15, a full squad, and features all-wheel drive. The company brought it to the show to solicit feedback from soldiers and potential international buyers. So why is it a robot?

Oshkosh also markets an autonomous vehicle technology called the TerraMax that essentially turns any OshKosh vehicle into a self-driving drone, including the M-ATV demonstrator, if need be (OshKosh confirmed.)

While the Army hasn’t said exactly why they chose OshKosh over its competitors for the Humvee replacement, many think that the TerraMax may have had something to do with it. Check out the video below that just screams: shut up and take my money, Washington!

Of course, not all of these will make it onto the battlefield of the future. But any technology that can face danger in the place of a human is a thing worth celebrating, even if only on the trade show floor.

NEXT STORY: In a Groundbreaking Deal, Ukraine May Buy US Armor for Its Humvees