How to Overcome Challenges of Managing Hybrid, Multicloud Environments
Skip to Content
What you need to know about the defense industry - in your inbox.
Business
Unprecedented: US Air Force Will Let a Defense Company Pick Its Next Jamming Plane

The latest twist in the Compass Call replacement saga sparks concerns that it cedes an inherent military function to a private firm.

The U.S. Air Force plans to allow a defense company to pick its new electronic-attack jet, an unprecedented move that just might herald the end of an era for the most prominent maker of large intelligence aircraft.

Some industry executives and watchdogs said this cedes an inherent military function to a private firm and warn that previous decisions to put a company in charge of an expensive military project have led to failure and wasted money. But Air Force officials say it’s the best way to replace its 42-year-old EC-130H Compass Call aircraft.

“We made this decision after looking at all the options — laying out pros and cons, looking at a variety of different methods that we thought we could work our way through this,” Lt. Gen. Arnold Bunch, the Air Force military deputy for acquisition, said in an interview.

While the 14 Compass Call aircraft look like old C-130 cargo planes on the outside, they are filled with highly classified, state-of-the-art electronics gear that allows airmen to disrupt communications on the battlefield below. The EC-130H has been heavily used in both Iraq and Afghanistan over the past 15 years, listening in on al Qaeda, the Taliban, and, more recently, ISIS.

Now they are wearing out and growing ever more vulnerable to advancing enemy weapons. Bunch said the Air Force plans to transfer 10 of the electronic packages — largely made by BAE Systems and installed by L3 Technologies — to new aircraft that can fly further and higher and offer better reliability.

But which new aircraft? Instead of soliciting bids from rival plane makers, Air Force leaders are handing the decision to L3, which will perform the transfer and reinstallation. This appears to be unprecedented.

“I can’t give you an example specifically of a contractor picking the aircraft,” Bunch said.

He’s not alone. Pentagon officials and industry sources say this is the first time in the Air Force’s 70-year history that it will let a defense contractor choose the type of aircraft that will make up a small fleet of new jets.

Return of the LSI

The Compass Call replacement is structured as a “lead systems integrator” program, an acquisition method that grants a contractor the power to make decisions typically made by the military. It’s a twist on previous times the Air Force has used this type of contract to allow contractors to buy subcomponents — like a radar — to go inside a plane.

“You can’t really call an aircraft a subcomponent, but in this case, the real technology stuff and everything else is the guts. It’s what’s inside the EC-130 platform and we’re buying something to carry it,” Bunch said.

But programs built on the lead systems integrator, or LSI, model have a record of delays and ballooning costs, like the Army’s Future Combat Systems and the Coast Guard’s Deepwater programs.

“Some observers have expressed concern that LSI arrangements can result in the government having insufficient visibility into many program aspects such as program costs, optimization studies conducted by LSIs for determining the mix of systems to be acquired, LSI source-selection procedures, and overall system performance,” the Congressional Research Service wrote in 2010. The Pentagon and other federal agencies used the LSI model “in large part because they have determined that they lack the in-house, technical, and project-management expertise needed to execute large, complex acquisition programs. It is not altogether clear what all of the reasons are for this insufficient expertise determination.”

One observer went further, calling the use of LSI for Compass Call an “awful idea.”

“Using lead systems integrators is a terrible approach for taxpayers, and Congress has rightfully checked the ability of the government to use this method in the past,” said Mandy Smithberger, director of the Straus Military Reform Project of the Center for Defense Information at the Project On Government Oversight. “LSIs verge on performing inherently governmental functions and have perverse incentives that we've found usually don't benefit the warfighter.”

However, the Congressional Research Service noted in its report that supporters of the contracting method say it “can promote better technical innovation and overall system optimization. This is largely because private-sector firms often have better knowledge and expertise, when compared to federal government agencies, of rapidly developing commercial technologies that can be used to achieve the government’s program mission and objectives.”

Aircraft integration work — modifying a commercial plane built to carry people into a mobile command center with lots of computers and workstations — is a highly specialized business. L3 has done the job for other Air Force intelligence planes, including the MC-12 Liberty and RC-135 Rivet Joint.

Bunch cited this experience in defending the Air Force approach.

“We’re trusting L3 to make … the decision based on what they’re got to do to rehost the equipment and get a platform that we can sustain in the long term,” he said. “We understand what L3’s rates are for what they’ve modified before. We’ve done a lot of business with them before and they’re actually the ones doing it at the right security level for the Compass Call mission that we have today.” 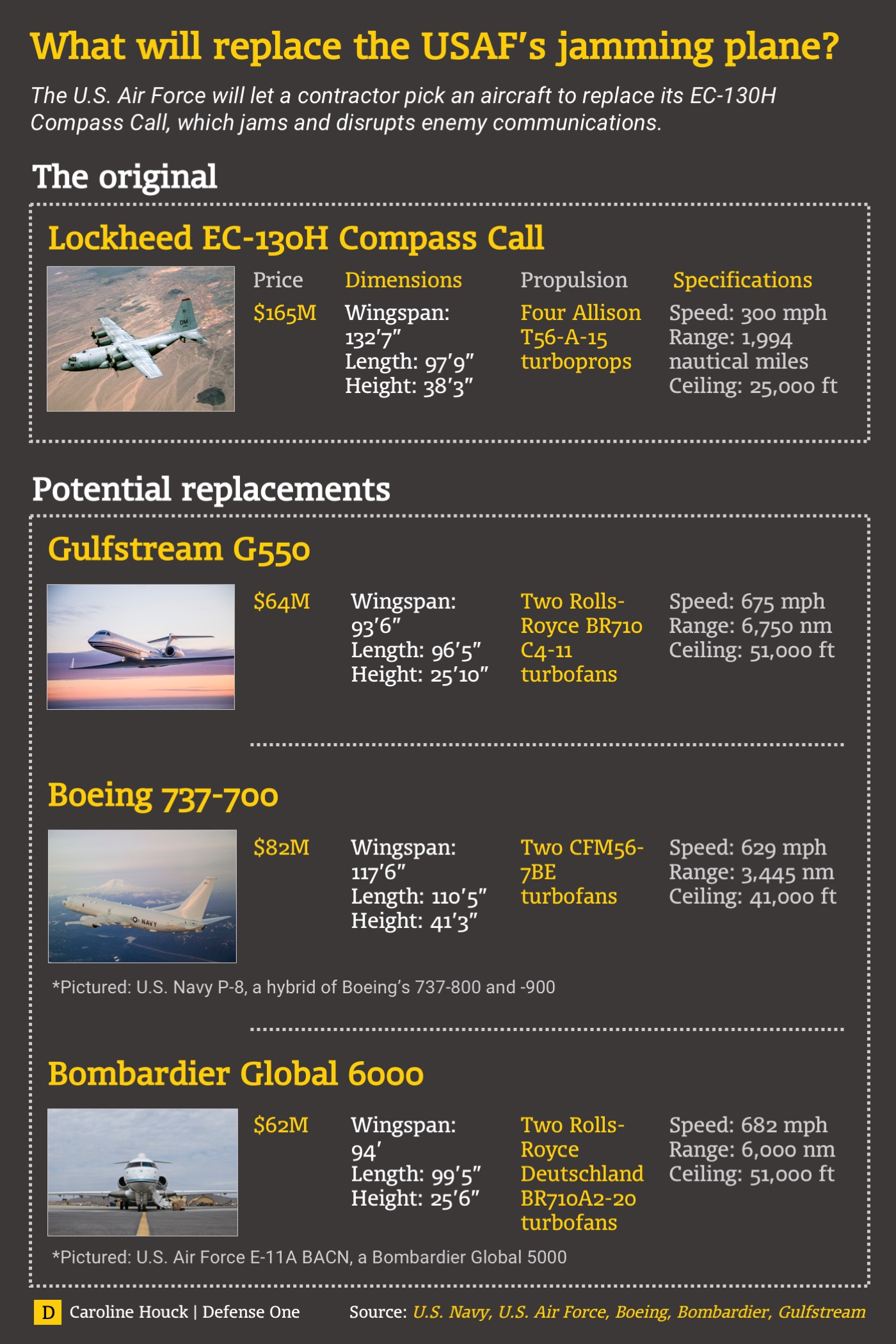 Restructuring the effort as an LSI is just the latest twist on the Compass Call program. In 2015, Air Force leaders said they wanted to retire all 14 EC-130Hs to save money. They changed their minds in 2016, announcing a plan to move 10 of the electronics packages into new Gulfstream G550 business jets. That elicited concern from Congress, and a formal protest from Bombardier, which wants to capture the business for its own Global 6000 aircraft.

Now the Air Force has denoted the Compass Call replacement an urgent operational need, which allows the service to fast-track the program through the Pentagon’s acquisition process.

“We needed it quickly and that’s partially due to the age of the platform and the cost and also due to where we see potential adversaries going,” Bunch said. “I need to get it done fast because we’re watching what the world’s doing and we need to recapitalize.”

How fast is fast? Ten years. Each Compass Call electronics packages will be moved to a new aircraft only when an old one comes in for its scheduled overhaul. That's to keep the replacement program from disrupting real-world missions, Bunch said. The cost: Roughly $2 billion over the next decade, according to Capt. Emily Grabowski, an Air Force spokeswoman.

In 2016, the EC-130H was able to fly its missions just 72 percent of the time, Grabowski said. The plan to shrink the size of new fleet counts on the 10 new aircraft being able to do the work of all 14 older ones.

The most natural choice for L3 might be Gulfstream, its partner in past contracts to transform business jets into intelligence planes. “That decision has not been made,” Christopher Kubasik, L3’s president and chief operating officer, said April 27 on the company’s first quarter earning call. “It could be a 737, it could be one of multiple business jets.”

But officials at Boeing and Bombardier aren’t sure their planes are being given a fair shake.

“Bombardier’s position on this matter has been, and remains, that the program should be awarded on the basis of a fair and open competition,” Stéphane Villeneuve, vice president of Bombardier Specialized Aircraft, said in a statement. “We will remain vigilant, in the study of the requirements and of the selection process of the aircraft, that the current outreach is indeed in support of such a fair and open competition.”

Boeing, which has showed off models of a 737 jetliner in a Compass Call configuration at Air Force trade shows, continues to tout its would-be entry.

“We would like for the 737 to be fairly evaluated for the Compass Call mission,” said Boeing spokeswoman Caroline Hutcheson.

Boeing in particular is worried that the choice will shape how the Air Force replaces several fleets of old Boeing 707 aircraft, many of which date back to the 1960s. Boeing’s defense CEO, Leanne Caret, has made winning these replacement contracts a major priority for the company. For example, the service is preparing to choose a contractor to replace the E-8C JSTARS, a Boeing 707 with a massive radar that can track moving targets on the ground. Three teams are expected to bid, one that uses a Gulfstream, one a Bombardier and one a Boeing.

As for L3, it sees the Air Force’s decision to give them the lead role on Compass Call positioning them well for future business.

“I am encouraged by the direction of this procurement because that is critically important for L3 being an integrator and being an equipment provider that it gives us a very nice place on the recapitalization of some of these [intelligence, surveillance and reconnaissance] platforms,” Michael Strianese, the firm’s chairman and CEO, said on the earnings call last month.

“We're very focused on doing an excellent job for our customer, and hopefully they'll maintain this as a position for other platforms as well,” he said. “Hopefully this will be a new way some of these acquisitions are done.”