Inside the Disaster Zone
Skip to Content
Get all our news and commentary in your inbox at 6 a.m. ET.
Ideas
Why It’s OK for Obama To Ignore Military Advice

Presidents don’t always listen to their top military leaders when it comes to matters of national defense. And that’s not always a bad thing. By Lawrence Korb 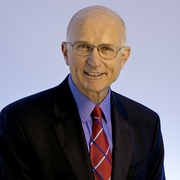 Many critics of President Barack Obama who want us to send thousands of American ground troops to destroy and defeat the Islamic State of Iraq and the Levant, or ISIL, claim that by pledging not to give a direct combat mission in Iraq and Syria to the troops, Obama is ignoring military advice that the consequences of taking this option off the table will be disastrous for America and the region.

Advocates of this position point to recommendations by Gen. Lloyd Austin, the head of U.S. Central Command, the testimony of Joint Chiefs Chairman Gen. Martin Dempsey before the Senate Armed Services Committee on Tuesday, and the remarks of Army Chief of Staff Gen. Ray Odierno the following day to his fellow Army chiefs in Europe, who have all said that conditions on the ground in Iraq and Syria should dictate military strategy. Other retired military officers, like Gen. James Mattis, who preceded Austin at CENTCOM, have also argued that the president should not rule out the possibility of the need for a larger ground force.

“You just don’t take anything off the table up front, which it appears the administration has tried to do,” Mattis told the House Intelligence Committee on Thursday.

The parade of serious military advice is a classic part of the march to war. The issue is not simply whether putting American forces into Iraq and Syria is the right strategy, but whether civilian policymakers should always listen to the nation’s military leaders when it comes to matters of national defense. 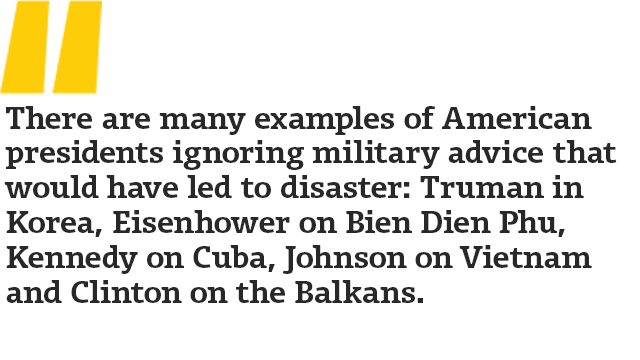 However, history tells us something different. There are many examples of American presidents ignoring military advice that would have led to disaster. In 1951 President Truman ignored General MacArthur’s advice about expanding the Korean War to mainland China. Instead, he started negotiating with the Communist Chinese – negotiations that eventually restored the status quo ante. In 1954 Eisenhower ignored the advice of Adm. Arthur Radford, the chairman of the Joint Chiefs of Staff, who wanted to send American forces and firepower, including nuclear weapons, to bail out the French at Bien Dien Phu. The retired five-star general elected to begin negotiations in Geneva with the Communist North Vietnamese that granted them control over the northern half of the country.

President John F. Kennedy refused the recommendations of his military leaders to attack Cuba during the missile crisis, barely avoiding all-out war with the Soviet Union. Rather, he pledged not to invade Cuba, and to withdraw American missiles from Turkey, in exchange for the removal of the Soviet missiles from Cuba. President Lyndon B. Johnson ignored the advice of his military chiefs to send 200,000 more troops to Vietnam after the Tet Offensive. Instead, he called a halt to the bombing and began negotiations with the North Vietnamese.  Can you imagine where the country would be if any of these leaders followed the advice of the military in those instances? More recently, President Bill Clinton ignored the advice of his military leaders against taking military action in the Balkans, thus creating a much better situation in the heart of Europe.

Certainly, there have been instances where presidents had overruled the advice of military leaders, with dire consequences. The most recent examples occurred under President George W. Bush. He not only ignored Army Chief of Staff Gen. Eric Shinseki’s advice that several hundred thousand ground troops would be needed to remove Saddam Hussein and restore order in Iraq after his removal. Not only was Gen. Shinseki ignored, he was publicly derided and undermined by the president and the secretary of defense when they appointed his successor early, even though Shineski still had a year left in his term. Ironically some of the same people now calling on Obama to listen to his generals and keep the door open to having combat ground troops in Iraq did not speak up for Shinseki. Bush also ignored the advice of his military commanders by diverting attention and resources from Afghanistan to Iraq, before the mission of restoring stability in Afghanistan and capturing Osama bin Laden and destroying al-Qaeda was completed.

It is important for Obama and for any president to listen to the advice of his military professionals. But military professionals, like any other government experts, focus only on one aspect of the situation. Presidents, who have many factors to consider, often choose to not accept military advice on how to deal with national security issues. For the most part, the results of those decisions have been good for the nation and its armed forces. Given our disastrous experience with sending large numbers of ground troops into Arab and Muslim countries, Obama is correct in ignoring the advice of his generals and refraining from assigning a broader combat mission to U.S. forces on the ground in Iraq or Syria.

NEXT STORY: More Troops, Not Nukes, Will Deter Russia