Next Generation Interceptor: The Nation’s Next First Line of Defense Against Ballistic Missile Threats
Skip to Content
Get all our news and commentary in your inbox at 6 a.m. ET.
Science & Tech
This Scientist Explains Why Israel's Iron Dome Is Overrated

Want to stay alive in Israel? Forget Iron Dome and check your phone. By Patrick Tucker

The Iron Dome may have more than a few cracks.

Israel’s claims about the anti-rocket shield’s effectiveness, specifically that it is able to intercept 90 percent of the rockets that Hamas has sent into Israel, are tantamount to fraud according to MIT science, technology and national security expert Ted Postol.

In a paper submitted to the Bulletin of Atomic Scientists, obtained prior to publication by Defense One, Postol explains at length the 90 percent number is fetched from thin air.

Congress appears to have bought it, however. On Tuesday, following the breakdown of ceasefire negotiations between Israel and Hamas, a Senate panel voted for $351.9 million in Iron Dome funding next year, nearly double the amount that the Defense Department originally requested for the weapon system, which is a joint project of Raytheon and the Israeli defense contactor Rafael.

“We looked at it and went back and forth, we talked to the Pentagon as well as [officials] from Israel, and we believe, particularly at this moment in time, that this is a justified expenditure,” Sen. Dick Durbin, D-Ill said, at the time.

It turns out, however, that a simple smartphone alert messaging app, the so-called Color Red app, is doing much more to save lives in Israel than Iron Dome. Color Red recently partnered with Yo to better deliver real-time warnings of incoming rockets.

Iron Dome works by shooting interceptor missiles at the Hamas rockets in flight, using radar tracking and guidance. That guidance is not working properly and sending Dome interceptors to less than optimal engagement points. But that’s not the only problem. The interceptors don’t hit the Hamas rockets directly so much as detonate in the air very, very close to them. The detonation is triggered by the interceptor rocket’s Laser Fuse, a beam (represented in blue in the graph) that detects the position of the 10 to 20 pound Russian-made GRADs that Hamas shoots into Israel. 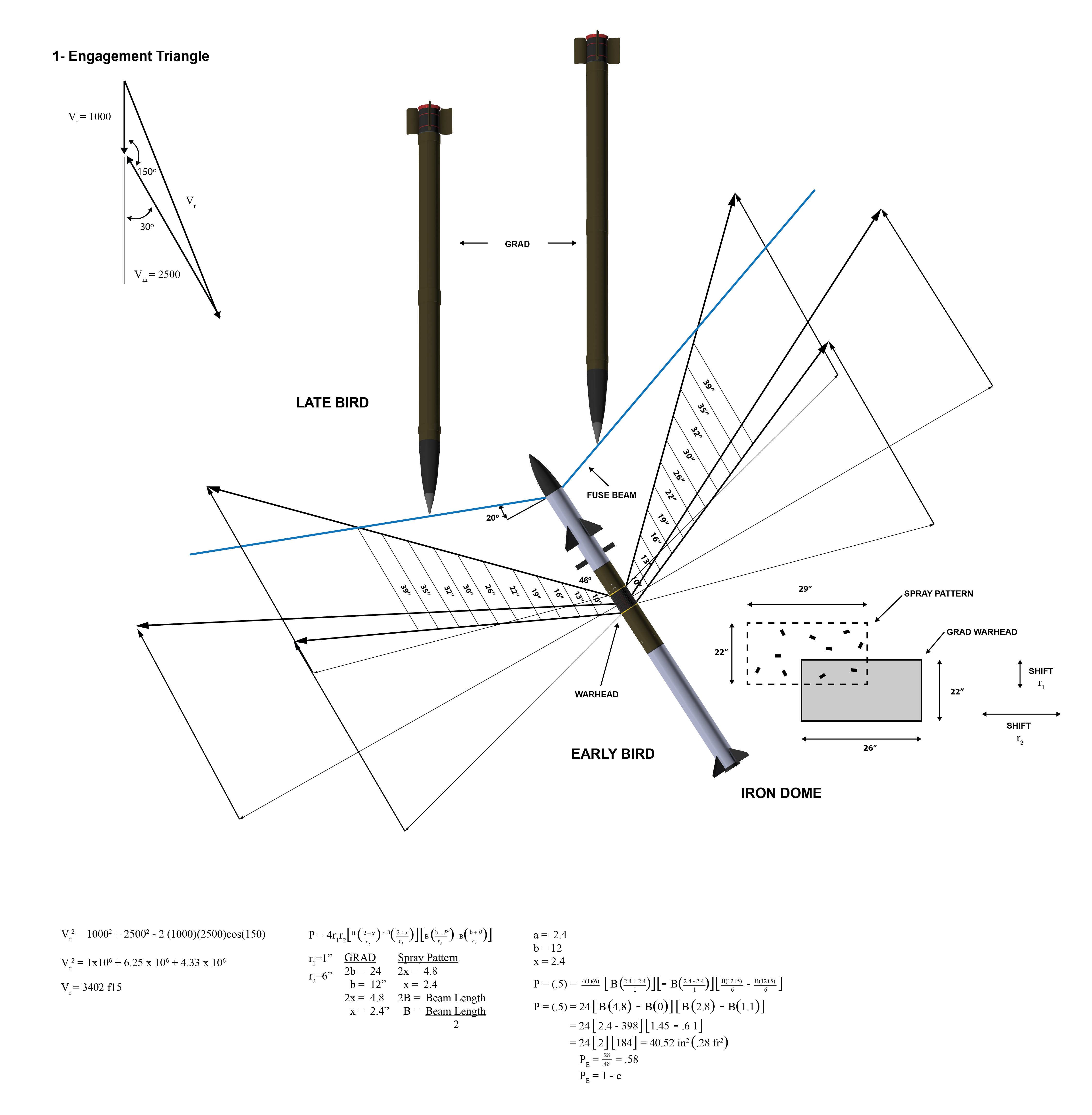 A diagram showing an Iron Dome missile and its Laser Fuse targeting mechanism. Via Ted Postol

Postol’s calculations show that when the speed of the GRAD rockets varies too much outside of 1200 meters per second, variations that the Laser Fuse can’t detect, front-on engagements become less likely. In all, head-on collisions probably account for only 20 percent of interceptor on GRAD engagements. That’s key because those engagements are necessary in order to destroy the incoming ordinance. Near misses, tail and side hits won’t do the trick, says Postol.

“If the Iron Dome interceptor hits the back-end of the target-artillery rocket, all that will happen is damage to the expended rocket motor tube, which is basically an empty pipe. Damaging the back-end of the target-artillery rocket essentially has no effect on the outcome of the engagement. The pieces of the rocket will fall in the defended area and the warhead will almost certainly go on to the ground to explode,” writes Postol.

His paper shows that given low engagement rate, low warheard destruction rate and issues of missing data, the actual success rate for the Dome falls much closer to a miserable 5 percent.

As shown in the performance “guesstimate,” if we assume the engagement geometry and 20 percent of the engagements were front-on, then at that time we estimated the probability of destroying a GRAD warhead might be between 0.3 and 0.6. Thus, if all other engagements affectively resulted in a zero probability of intercept, then the intercept rate would be roughly’

Or an intercept rate, defined as destruction of the artillery rocket warhead of between 6 and 12 percent. Our best estimate is that less than 20 percent of the engagements we were able to get data on were actually front-on, and we have no information about the actual miss distances and whether the engagement attempt geometries were close to antiparallel. Thus, the statement “the intercept performance of Iron Dome appears to be probably five percent or less.”

If that’s the case, and Iron Dome really is junk, why have Israeli casualties from rocket attacks been so low in the current round of volleys, with only one civilian casualty on the Israeli side? Postol credits Israel’s early warning system, which gives Israelis 10 seconds or so of time to seek shelter before a rocket blast. The actual warning time can be longer.

It also means that that a lot more rockets are hitting buildings in Israel than the government is acknowledging. The proof of those collisions is out there, says Postol, and it will reveal itself in the future in form of increased insurance claims for property damage. If the Israeli government were eager to show the Dome’s effectiveness, they could just release verifiable insurance claim numbers and put the issue to bed, says Postol. But “The Israelis have been unable to provide any evidence of any reduction in ground damage that would surely have to accompany the amazing success rates that they have been claiming.”

When asked if he believed that the Israeli government is deliberately perpetrating an act of fraud against the American people, he answered simply that the facts on the ground do bear out that interpretation of events. “They’re taking advantage of the predilection of Americans to support them…It’s ultimately disrespectful to the American people,” he told Defense One.

If Postol is right, the Dome isn’t just an expensive canard of smoke and mirrors, it’s also undermining the very technology that’s keeping Israelis alive. Warning systems like Color Red can’t work if the people of Israel are putting their faith in fantasy protection.

NEXT STORY: Could a Brain Scan Protect U.S. Troops from Insider Attacks?