Shifting Left: How DevSecOps Strengthens Agency Security and Risk Management
Skip to Content
Get all our news and commentary in your inbox at 6 a.m. ET.
Policy
Buying a New Air Force One Is Complicated

Buying a new jet to fly the American president around the world is more complicated that cutting Boeing a check for a new 747.

Think it’s tough to buy a new car? Try buying a plane that has all the bells and whistles fit for a president, including some that might not have been invented yet.

The aircraft is the easy part. In this case, it’s a massive, four engine, two-floor Boeing 747-8 from a company that has been churning out aircraft from its Washington State assembly lines for nearly a century. But the must-have equipment needed on the plane that acts as a mobile White House is where things get more complicated.

First, the plane must be able to refuel inflight so, if need be, it could remain airborne indefinitely. A nuclear war is likely the only time this would happen, but Air Force One must be prepared for everything.

But that’s not the hard part. The must-haves include the latest, cutting edge military communications equipment that allow the president to work as if he’s sitting in the Oval Office in Washington. The president must be able to conduct secure video conferences and phone calls, access classified government computer networks and order a nuclear strike.

It also needs an operating room, walk-in refrigerator and defensive systems that could allow the jetliner to evade a missile attack.

President Barack Obama on Monday will set aside money in his 2016 budget proposal for a new Air Force One, a jet he, and possibly his successor, will never have the chance to fly.

President Reagan bought the two VC-25 aircraft that currently serve as Air Force One. While they look bright and shiny 747s on the outsides, their insides have aged. Not so much the leather seats in the cabin, but the guts of planes. The VC-25 is a highly modified 747-200, a design that have been significantly modified and improved three times over the past 40 years. 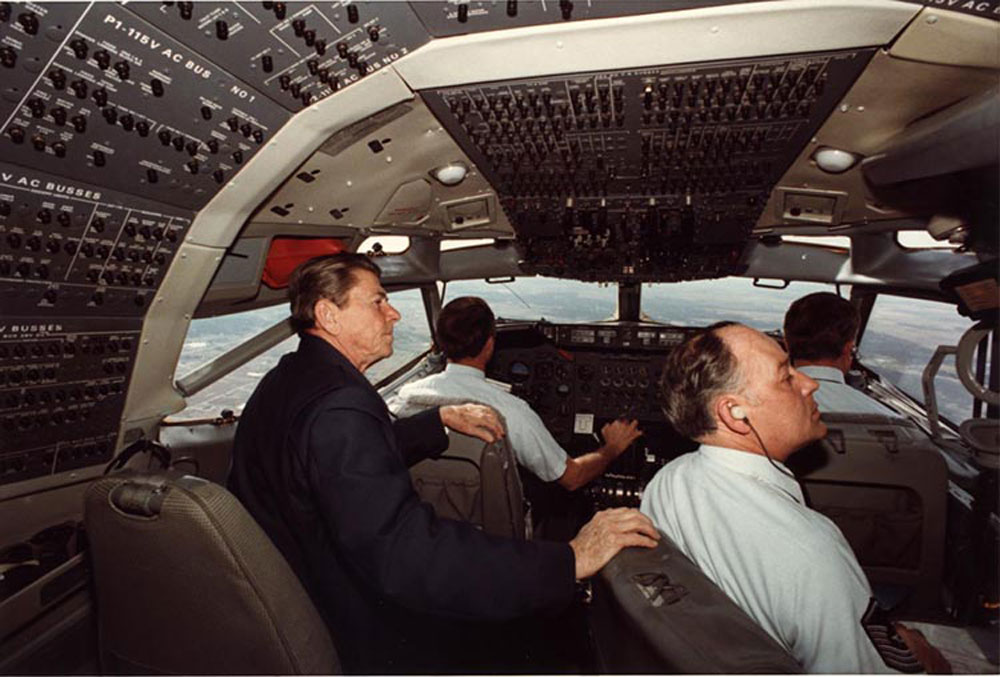 President Ronald Reagan sitting with the crew in the cockpit of Air Force One an March 16, 1982. (Ronald Reagan Presidential Library and Museum)

To put it in perspective, the first 747-200 jetliner began flying passengers in 1971, according to Boeing. The last commercial version came off the Boeing’s Everett, Washington, production line 24 years ago, in 1991. The two VC-25s were among the last 747-200s ever built, with Boeing delivering them to the Air Force in 1990. George H.W. Bush was the first president to fly on this aircraft.

Since the 747-200 hasn’t been built in nearly a quarter century, replacing broken parts is tough. In fact, some of the companies that built the original parts no longer exist. There have been times when spare parts have been taken from retired jetliners parked in desert, according to Air Force and industry officials. Sometimes parts have to be specially made. A new plane, experts say, would not only boost reliability but improve efficiency.

There are little-known, unwritten rules a president must follow when buying a new Air Force One. Most important, the buy has to come in a president’s second term. That ensures the current president will never use the aircraft. He or she is expected buy the plane for future presidents. There would be plenty of negative perceptions, and likely political ramifications, if a first-term president bought himself a new jet.

Obama will join Reagan, who bought the current Boeing 747s, and President Dwight Eisenhower, who bought the first VC-137, an Air Force One based on the Boeing 707 jetliner first used by President John F. Kennedy, and set aside money for the presidential aircraft in their second terms. 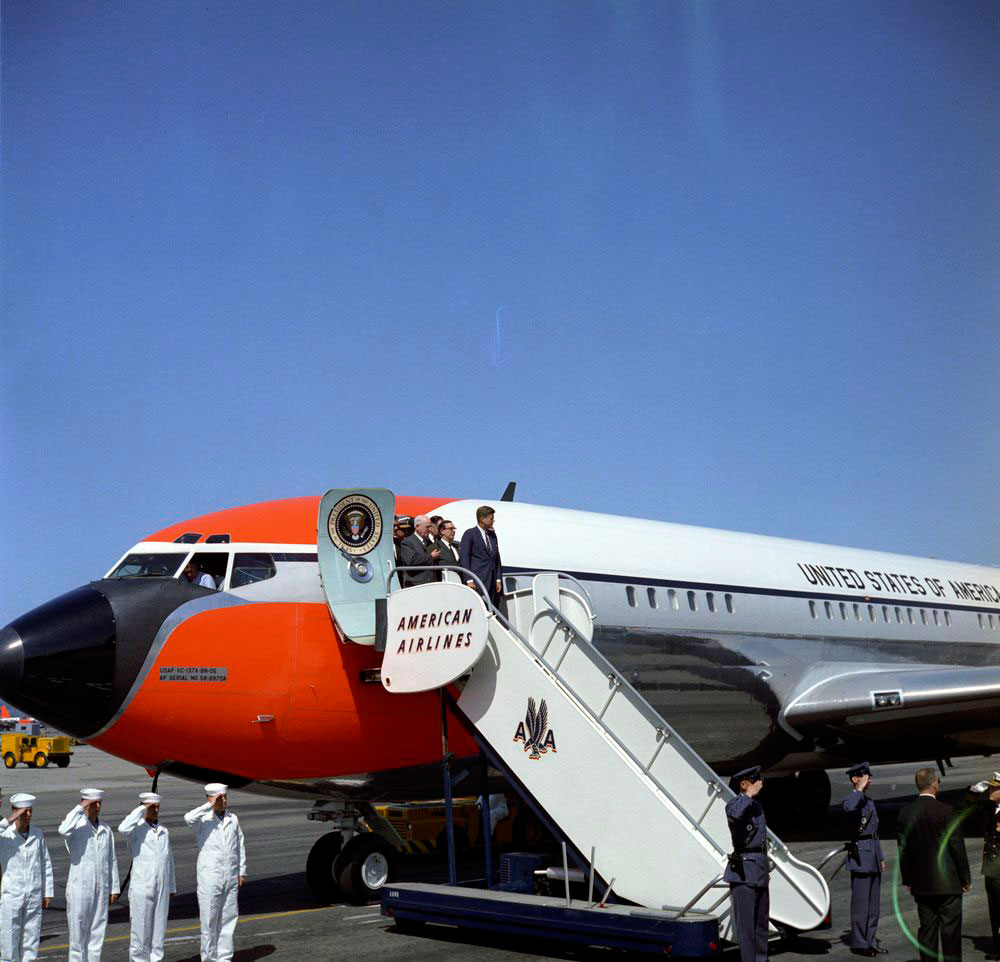 President George W. Bush tried to buy a new Air Force One before the end of his presidency, but was blocked. Inside the Pentagon, top generals could not agree on how many new aircraft to buy; some wanted three aircraft, others two.

There are two VC-25s now. One of the aircraft is typically in maintenance, a process that lasts about six months. But when the ever-expanding campaign season comes around, the White House often wants both VC-25s ready hit the trail, according to former Air Force officials associated with the plane.

Some within the Pentagon felt a fleet of three Air Force One aircraft would ease maintenance pressure and ensure two jets were always ready. Others felt that the Air Force should combine buying new presidential jets with the overdue replacement of the defense secretary’s plane, the E-4B Nightwatch, more commonly called the “Doomsday Plane.” The E4-B is a specialized 747 designed to serve as the command center in the sky during a nuclear war. There are four Doomsday Planes, all heavily modified 747-200s built for the military in the 1970s.

If the Air Force buys the planes in 2016, the earliest it would likely carry a president would not be until 2019.

At the time, a separate project to build a new Marine One, the president’s helicopter, was delayed and wildly over budget. In the end, everything was canceled, delaying the new Air Force One project at least six years.

Now as the 2016 budget proposal goes to Congress for review, it is the last opportunity to buy a new Air Force One for at least another five years. This will be the last budget the Obama administration crafts and executes. It will build a 2017 budget, but Obama’s successor will likely modify it upon taking the oath of office in January of that year.

If the new plane is not purchased now, the project would certainly be delayed indefinitely as a two-term president would be needed to make the buy.

And there is another reason why the Pentagon is running out of time to buy an aircraft. Boeing announced late last year that it would slow production of the 747-8, the most recent variant of the 747, which is much larger, more efficient and high-tech than VC-25 airframe.

The Air Force formally announced last week that the new Air Force One would be a modified 747-8, not a surprise since the only other candidate was the quad-engine Airbus A380, which is a gargantuan, two-deck super jumbo jet. Airbus had expressed little interest in the new Air Force One project as it had been viewed as a political dark horse for one major reason: The aircraft is built by the multinational, European company in France. Boeing – the only American wide-body aircraft manufacturer left in business after decades of consolidation – had been seen as the only option for the new presidential aircraft. And when it comes to buying an aircraft that will fly around the president of the United States, buying American really matters, experts and historians say.

In an attempt to control costs throughout the project, the Air Force is looking to compete long-term maintenance and upgrade work on the new jets over the 30 years it is expected to carry American presidents.

There is no formal delivery timeline for the new aircraft yet, but if the Air Force buys the planes in 2016, the earliest it would likely carry a president would not be until 2019 or 2020, experts say, as the specialized modifications will likely take two or three years.

While the 747 has been considered the most likely contender to fly the president, the Air Force could have gone with a smaller, twin-engine 777 aircraft, but experts say it was not a likely candidate for two reasons: First, the extra two engines on the 747 generate much more power for the special communications and electronic equipment. The other is ramp presence, or the plane’s ability to stand out against other aircraft on the flight line.

The president still flies on other military aircraft, which use the call sign Air Force One when he is on board, usually on short-distance flights or when an airport’s runway is not long enough for the VC-25. In those cases, the president would use a C-32, a modified Boeing 757, or a C-37B, an even smaller Gulfstream 550 business jet. The smaller planes do not have all of the bells and whistles of the larger 747.

With the new Air Force One project now moving along, the speculation can begin on who will be the president to christen it.

NEXT STORY: Should Veterans With PTSD Be Exempt From the Death Penalty?