Here’s How Multi-cloud Is Driving the Future of Government Work
Skip to Content
Get all our news and commentary in your inbox at 6 a.m. ET.
Science & Tech
What Military Contractors Can Learn From the Pentagon's 2016 Budget

From the outside, the Pentagon’s budget looks relatively similar that the plan the Defense Department laid out one year ago. But upon closer inspection, President Barack Obama’s budget request gives a glimpse into how the military will look decades from now.

“This budget does show some priorities,” said Roman Schweizer, an analyst with Guggenheim Securities.

DOD is looking to the latter part of this decade as a time to get back to basics and invest for the future. For more than a decade of war, the military abandoned some of its high-end combat training and modernization to focus attention the counterinsurgency mission that in Afghanistan and Iraq. Now, defense leaders, primarily Deputy Defense Secretary Robert Work, have put an emphasis on innovation. Specifically, the Pentagon’s budget proposal emphasizes high-speed strike weapons, advanced aircraft, railgun technology and lasers.

The future aircraft project looks beyond fighter jets to all sorts of planes, according to Air Force Lt. Gen. Mark Ramsay, director of force structure, resources and assessment on the Joint Staff.

“It really is the future of air dominance, how to dominate in air combat,” he said. “So there's a whole host of things tucked underneath that that are all about driving and developing technology for 15 to 40 to 50 years down the road in the future.  And, if we don't do that today, we're not going to stay ahead of our potential adversaries.”

Defense manufacturers pay the most attention to two key parts of the defense budget, procurement and research and development. When combined together, these are called the modernization accounts, meaning the money is used to buy new weapons and equipment. Collectively, these two coffers include $177.5 billion, making up more than 33 percent of DOD’s $534 billion base spending request in 2016.

The Pentagon’s procurement request alone -- money for new planes, ships, vehicles and drones -- is up more than 15 percent in 2016 when compared to the current year. 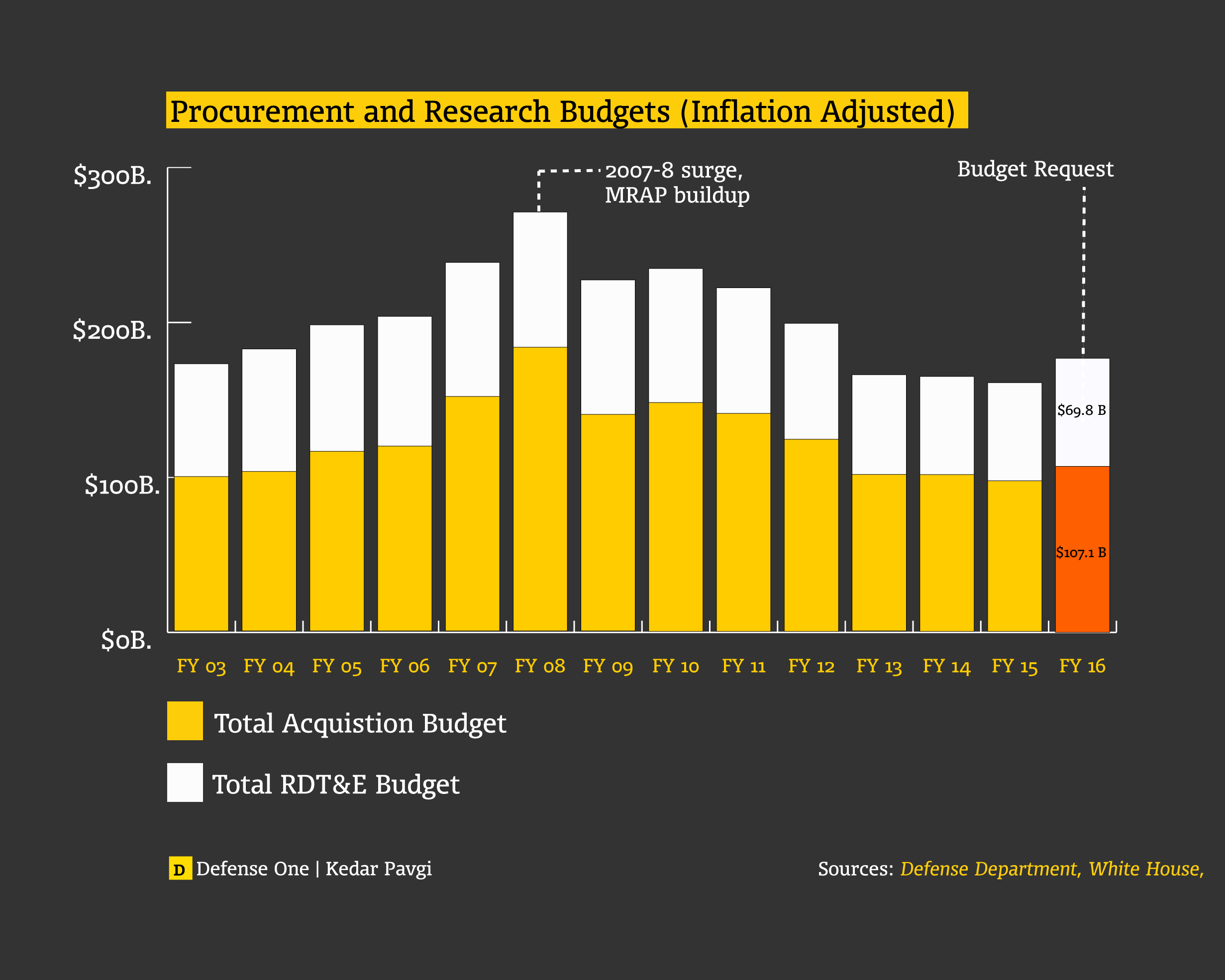 Defense companies are closely watching an Air Force contest to build a new bomber, a project likely worth more than $40 billion. Northrop Grumman is competing against a Boeing-Lockheed Martin team. The Air Force is expected to choose a winner later this year.

The Pentagon has asked Congress for $1.2 billion for the new bomber in 2016. The project is considered a franchise project for Boeing, which is also in the early stages of building new aerial tankers that can refuel military aircraft inflight.

DOD continues to ramp-up production of the Lockheed Martin F-35 Joint Strike Fighter, the aircraft at the center of the Pentagon’s future weapons plans, asking for 57 new jets to the tune of $10.6 billion.

Another $1.4 billion is requested for new nuclear-powered submarines that will carry intercontinental ballistic missiles.

The Pentagon also wants to boost spending on classified projects in 2016. The spending request includes $18.8 billion for these secretive efforts, a 7 percent increase from 2015, according to data compiled by Byron Callan, an analyst with Capital Alpha Partners.

The looming factor that could slow these future weapon plans is the return of federal budget caps, or sequestration. The Pentagon’s budget proposal exceeds those caps by $34 billion, weapons spending could see about a 7 percent cut across the board, experts say.

Funding across the major weapon categories, such as aircraft, shipbuilding, missiles, ground vehicles and equipment and computer systems, is up 7 percent or higher in most cases, with space systems being the one area that showed spending levels flat, according to Callan’s data.

Pentagon Comptroller Mike McCord said: “The vast majority of the efforts that we're undertaking in this area (space) are highly classified. We're going to struggle to explain them, I fear, other than to our committees behind closed doors, which we've already tried to start doing. I can say in general terms, we're looking at resilience.”

The other factor that could slow new weapon purchases are unforeseen global conflicts. The pace of Iraq and Afghanistan’s large war operations has slowed, but not to the levels anticipated. The spread of Islamic State militants throughout Iraq and Syria and the airstrikes to counter them, additional deployments to Europe to reassure allies in the wake of Russia’s invasion of Ukraine and humanitarian deployments to Western Africa to help contain the Ebola outbreak have all consumed money and led to the deployment of around 10,000 troops.

Defense firms still want more certainty, and with the current budget proposal more than $34 billion in sequestration looming. If budget caps are lifted, it bodes well for all of the major defense firms, analysts say.

NEXT STORY: The Pentagon's Adoption of Cloud Technology Is Finally Taking Off