Nine Reasons Congress Should Nix the Air Force’s F-15EX Purchase
Skip to Content
Get all our news and commentary in your inbox at 6 a.m. ET.
Threats
Obama Has a Strategy for the Islamic State But He Better Have a Plan B

President Obama laid out a plan to defeat the Islamic State. But it’s hardly a shock and awe. Is there a Plan B? By Kevin Baron

“This is our strategy.”

If only President Barack Obama had said that two weeks ago, the conversations and arguments from bar rooms to situation rooms, in the Pentagon and the Middle East, may have been a lot different. The tone, at least, the politics, certainly. The pervasive doubt in the commander-in-chief’s resolve, probably. But one thing it seems would not be much different, judging by the details the president and administration officials delivered Wednesday evening, is the military mission to defeat the Islamic State.

In a televised primetime address to the nation from the White House, Obama delivered a series of strong statements declaring the United States has the moral and legal authority, firepower and resolve to fight this terrorism threat just as he has commanded Americans to relentlessly fight in Iraq, Afghanistan, Yemen and across the Middle East and North Africa. There were no surprises; the new counterterrorism plan is familiar to what already has been put forth and executed by this administration.

As expected, Obama will send additional U.S. troops to Iraq, but only as advisors who aren’t supposed to pull triggers and kill enemies – just point out the targets for Iraqi and Kurdish troops (and U.S. drone operators far from the front). More airstrikes are coming, too, adding Syria to the list, where Obama promised he would attack if required (as Pentagon leaders have insisted for weeks).

But without help from neighboring Arab leaders, a stable Iraqi government, and potent and loyal Iraqi armed forces, the mission to “destroy ISIL” remains unchanged. As does its prospects of success.

Obama said an additional 475 American troops would join the fight in Iraq but none as “combat troops.” Instead, 150 will serve as “advise and assist” personnel embedded with Iraqis at the brigade level or higher; 125 will man intelligence, surveillance and reconnaissance aircraft; and 200 will serve at headquarters. It’s the kind of command infrastructure Pentagon leaders prefer be set up now should the president want to send even more American troops for actual combat later. But it’s hardly a shock and awe for Baghdadi’s followers. 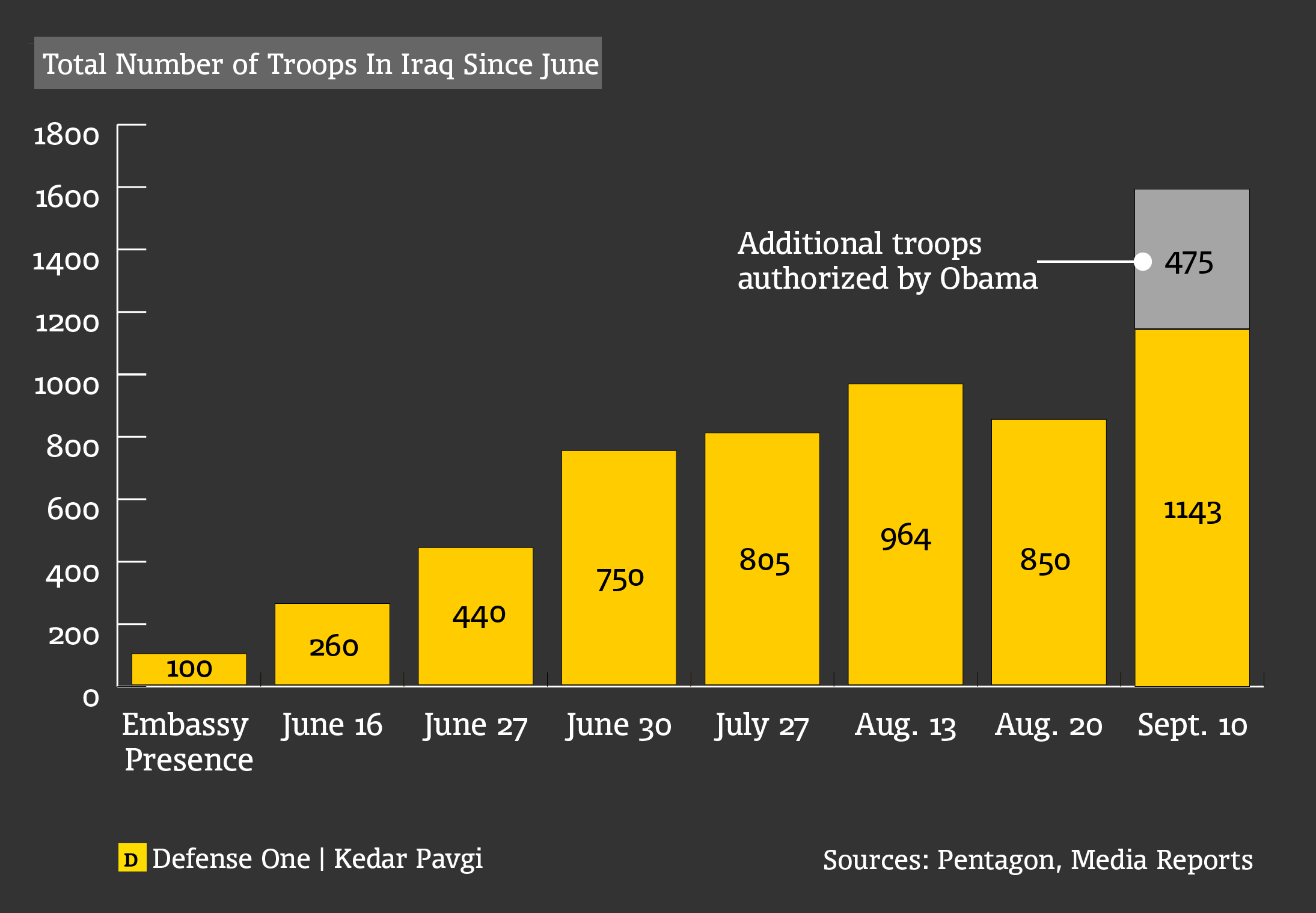 Obama’s most important message seemed to be that U.S. troops alone could not effectively stop the Islamic State, repeating yet another refrain heard before the NATO Summit last week to rally European supporters. It was a message now aimed at two important but skeptical audiences: Arab world leaders reluctant to fight and American voters itching for their leader to act, if only to a degree.

“Iraq will take on these terrorists on the ground with the backing of U.S. air power,” said Lukman Faily, Iraq’s ambassador to the U.S. But Obama gave no indication of his confidence in whether Iraqi ground forces will fight, or how soon after a new government settles in. It’s a timeline that matters because it will take months, not weeks.

While Obama wants to sell Americans on a mixture of measured responses and lethal air strikes (like the ones that U.S. forces used to kill the al-Shabab leader in Somalia last month), Americans want something to change. Conservatives detest Obama as a lead-from-behind ditherer in the Middle East. Some liberals in Congress have caught the itch, now, too. More Americans, while still opposed to major ground interventions, now parrot the critical narrative that if Obama had attacked inside Syria two years ago, or had fought to keep U.S. forces from abandoning Iraq in 2011, none of this would have happened.

For most Americans, the defining images of the current Iraq war are, on one side, ragtag Islamic extremists hanging out of the back of pickup trucks, waving black flags and shooting innocent passers by. On the other side, Americans show green-tinted, grainy overhead spy images of precision drone strikes on ant-sized ground targets. But no images have moved Washington’s needle more than that of two beheaded American journalists, Jim Foley and Steven Sotloff, whose deaths may have changed Obama’s tone – and policies – more than any other factors. More than 191,000 killed in Syria, according to the BBC.

So if this speech was meant to reassure a nation, what should Americans expect to see different now? Is it too late for both the region and the Americans who are already are disappointed by Obama? Did Obama say enough?

“So tonight, with a new Iraqi government in place, and following consultations with allies abroad and Congress at home, I can announce that America will lead a broad coalition to roll back this terrorist threat,” Obama said. “Our objective is clear: we will degrade, and ultimately destroy, ISIL through a comprehensive and sustained counter-terrorism strategy.”

“Working with the Iraqi government, we will expand our efforts beyond protecting our own people and humanitarian missions, so that we’re hitting ISIL targets as Iraqi forces go on offense. Moreover, I have made it clear that we will hunt down terrorists who threaten our country, wherever they are. That means I will not hesitate to take action against ISIL in Syria, as well as Iraq. This is a core principle of my presidency: if you threaten America, you will find no safe haven.”

Beyond the military, it’s up to Secretary of State John Kerry to pull together the coalition of the needed. Kerry was in Baghdad on Wednesday. A senior administration official briefing reporters before the speech said, “Secretary Kerry is going to Saudi Arabia tomorrow, where he will meet with key Arab foreign ministers, and to advance their participation in this effort. He will continue to travel across the Middle East and Europe, where he will be able to connect the effort we’ve done with European allies and other international partners with the coalition that we’re putting together in the region. And then by the time of the United Nations General Assembly, I think it will be clear the variety of commitments that are being made by individual nations.”

The president delivered a plan. But if his shaky conditions aren’t met, it’s hard not to wonder if there’s a Plan B.

NEXT STORY: The Case Against Another War in Iraq